One of the most admired, though sometimes controversial, pianists in jazz, Oscar Peterson (born 1925) in the post-war era claimed the same sort of status as earlier greats such as James P. Anderson, Art Tatum, Teddy Wilson, Fats Waller, Thelonious Monk, Bud Powell, and Bill Evans. Possibly the most successful artist produced by Canada, he has appeared on well over 200 albums spanning six decades and has won numerous awards, including seven Grammys. During his career, he has performed and recorded with, among others, Louis Armstrong, Count Basie, Ella Fitzgerald, Dizzy Gillespie, Duke Ellington, and Charlie Parker. 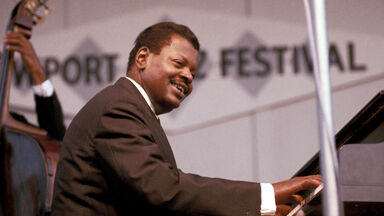 Peterson came of age during the bebop and swing years of the 1940s. A brute force on the piano, Peterson, similar to his idol Art Tatum, seems to play without strain and with a great command of his instrument. "Oscar told me," said younger pianist Billy Green to Don Heckman of the Los Angeles Times, "that the first thing he does when he sits down at the piano is to gauge the key drop—how far the keys on an individual instrument need to be depressed before the hammer hits the strings. He says— and he makes it sound so simple—that once he scopes that out, then he's in complete control of the piano. For the rest of us, of course, there are a lot more steps involved."

However, Peterson's abilities proved both a blessing and a curse. His tendency to play at high speeds and overuse of harmonic complexities have led critics to call his technique too overwhelming at times. Furthermore, according to music historians, Peterson's playing sometimes drowned out expression, leaving the intended musical statement uncommunicated. But perhaps, as many loyalists claim, Peterson just may be too good. And his durability and accomplishments have certainly validated his importance in the history of jazz.

Oscar Peterson was born on August 15, 1925, in the Canadian city of Montreal, acquiring musical confidence at an early age. Born with a naturally perfect pitch, he learned to play classical piano from his older sister Daisy, who also taught piano to Montreal pianist Oliver Jones. However, Peterson credits his father with first instilling in him the importance of music. Daniel Peterson, a West-Indian born Canadian Pacific Railroad porter and amateur musician himself, insisted that each of his five children develop musical skills. In particular, he wanted them to be exposed to music outside the values of the family, unlike the hymns that Peterson's mother (Kathleen Olivia John), a cook and a housekeeper, sang at home.

In 1930, at the age of five, Peterson began on the trumpet and piano, concentrating on the piano alone by seven years of age after a bout with tuberculosis. Although his father was a strict disciplinarian and expected perfection from his children, Peterson says that he remained always his biggest supporter. "He told me, 'If you're going to go out there and be a piano player, don't just be another one be the best.' He always had the belief in me, for which I'm grateful," as quoted by Maclean's contributor Nicholas Jennings. Deriving a sense of dedication from his father, Peterson thus practiced from morning until night, taking breaks only for lunch and dinner.

Later, at the age of 14, Peterson studied with Paul de Marky, a renowned Hungarian-born classical pianist. He discovered through de Markey, who, according to Peterson, could mimic Art Tatum exactly, an interest in jazz. Another teacher, Lou Hooper, led Peterson to recognize the importance of the classics, teaching his students to communicate in phrases such as "I have always felt Chopin was looking at a lovely landscape at the time he composed this piece because everything about it is so lush and green-like," recalled Peterson, as quoted by Gene Santoro for the New York Times.

Also at the age of 14, Peterson's determination as a child resulted in his winning a Canadian Broadcasting Company radio show competition, and before long he was making regular appearances. Then, in 1942, he accepted an invitation to join the Johnny Holmes Orchestra, a popular Canadian jazz ensemble. Afterward, in the mid-1940s, he formed his first jazz trio and landed a recording contract with the RCA Victor Canada label. By now, he was already known for his masterful, fluid playing technique. Those that visited the Alberta Lounge in Montreal to witness Peterson and his trio perform included Count Basie, Ella Fitzgerald, and other now-legendary figures in jazz.

On one particular night at the club in 1949, American jazz impresario Norman Granz was so impressed with Peterson that he asked the pianist to come to New York City with him as a surprise guest for his Jazz at the Philharmonic (J.A.T.P.) events at Carnegie Hall. At the performance, Peterson shared the stage with the likes of Charlie Parker, Lester Young, and Coleman Hawkins, setting the young musician's international career in motion. Thereafter, he spent much of the early-1950s touring with Philharmonic ensemble, traveling to 41 cities in North America in addition to appearing in Japan, Hong Kong, Australia, and the Philippines. Meanwhile, Granz became one of Peterson's closest friends and manager. His record companies recorded a number of Peterson's recordings, usually teaming the pianist with established artists like Fitzgerald.

For most fans, the classic Oscar Peterson remains his trio organized in 1953, featuring bassist Ray Brown and guitarist Herb Ellis. Although drummerless, Peterson's percussive style left little room for one anyway. The trio's recordings together include 1955's At Zardis, 1956's At the Stratford Shakespearean Festival, and 1957's At Concertgebouw. His next trio, in place by the late-1950s, included Brown and drummer Ed Thigpen, who remained with Peterson until 1965.

When Thigpen replaced Ellis, the group shifted from one in which any instrument could provide melody and harmony to the more standard piano, bass, and drums format. From here forward, Peterson would most often record in a standard trio setting. Some departures include Oscar Peterson Trio + 1, with flugelhornist Clark Terry, and the solo outing Tracks, both recorded in 1971.

Beginning in the early 1970s, Peterson embarked on a prolific touring and recording career, mostly for the Pablo Records label. Returning briefly to the drummerless trio, he recorded in 1973 Tracks and The Good Life, both featuring bassist Niels-Henning Orsted Pedersen and guitarist Joe Pass. He also recorded in a number of other settings, from duets with Dizzy Gillespie and Terry to symphony orchestra appearances. Meanwhile, Peterson was growing increasingly popular for his solo concerts, and he was recording during the 1970s and 1980s up to six albums per year.

During the 1990s, Peterson spent less time touring and recording in order to focus more on composing. However, in 1990, he reunited with Brown, Ellis, and drummer Martin Drew for an engagement at New York's Blue Note, which yielded four releases. In these performances, critics praised Peterson's emotional depth and softer playing style.

In 1993, Peterson suffered a stroke that diminished his ability to use his left hand. However, Peterson resolved not to give up performing and recording, initially spending hours in therapy to regain flexibility and control. And, as is often associated with strokes, he had to deal with the psychological trauma. "I still can't do some of the things I used to be able to do with my left hand," he said to Don Heckman for the Los Angeles Times. "But I've learned to do more things with my right hand. And I've also moved in a direction that has always been important to me, toward concentrating on sound, toward making sure that each note counts."

Peterson lived outside the city with his fourth wife, Celine, and continued his career as a concert pianist for many years after his stroke, though he knew that he would one day make a final performance. "When that happens, there's going to be no fanfare," he told Jennings. "I'm just going to get up from the piano, take my bows, thank my group, and say, 'This is it.' Then I'll close the piano and that will be the last time I play publicly."

Peterson continued performing, touring and recording for many years after his stroke, though with a less stringent schedule than before. He continued playing with other musicians as well as offering solo performances. He even recorded a live album ten years post-stroke. He recorded A Night in Vienna in 2003, during a live performance at Austria's Musikverein concert venue. The CD and DVD versions were released a year later, in 2004. He continued performing through 2006.

Positions held by Peterson, who has 12 honorary degrees, include chancellor at York University, from 1991 until 1994. He also founded the Advanced School of Contemporary Music in Toronto. His many awards include:

Additionally, in 2005, Peterson was honored by his home country by having his likeness featured on a commemorative stamp. He became the first living person in Canada, other than a reigning monarch, to be featured on a stamp.

In 2007, due to health difficulties, Peterson canceled his scheduled concert appearances. Oscar Peterson passed away from kidney failure on December 23, 2007. He was 82 years old. He died at his home in Mississauga, which is a suburb of Toronto.

His daughter, Céline Peterson, is a talented musician herself. She is actively involved in performance and music education.