Why Is Tecumseh Famous?

Tecumseh was a famous Indian leader who lived in the early part of this country’s history. He had a vision of joining all of the Indian tribes into one nation. He was the first Indian diplomat both among his own people and with the white man. 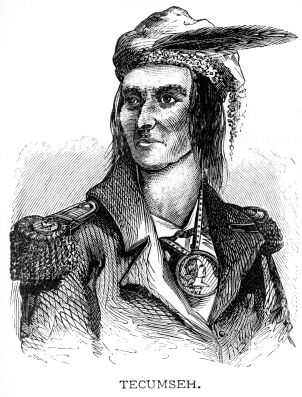 Tecumseh: A Leader Who Desired Peace

Tecumseh was one of the first Indian leaders that desired peace with the settlers and pursued it. He was also the first to find out that:

Tecumseh was a leader with great power who could persuade large numbers of people to come together and seek a higher good. He believed in the joining of all Indians under a single nation. His charisma was enticing and he was able to gather many of the tribes together to negotiate for Indian land with the settlers. They worked together in building a defense force to protect their land from those that would attempt to take it from them.

The Shawnee territory was being taken over by the settlers who were flooding into America. Despite treaties and promises, the Indians were being evicted from their ancestral homes. The American encroachment on the Native Americans began with hostilities in the area east of Virginia, which was home to the Cherokee Indians. However, the settlers moved west and seized land owned by the Indians in the Ohio River valley.

One thing that really helped shape the life of Tecumseh was his brother Tenskwatawa, the Prophet.

Consolidation of the Indian Tribes

Most of Tecumseh's life was spent trying to make a gathering of tribes a reality. He set up a center of government and political power in Tippecanoe. Tippecanoe became not only a center for Indian confederacy, but also a training center for the Indian warriors.

The settlers grew concerned about the power that Tecumseh was amassing around himself and his cause. They looked to the US government to deal with the problem.

Seeing so many Indians together worried the governor of the Indiana Territory, William Henry Harrison, so he sent an army to Prophetstown.

Tecumseh fled the area and didn’t return for three months. When he came back, he found the town destroyed and he gave up his vision of a confederacy with the settlers.

Under the climate of expansion into the western part of the country, Tecumseh felt there could be no trust with the white man who did not care for being honest and true in their dealings, but only about gaining land for themselves.

Following the destruction of Tippecanoe, Tecumseh and his warriors joined the forces with the British during the War of 1812 in hopes that they would return the land to the Indians if they won.

Tecumseh was the first Indian to serve at the rank of General in the British Army. Tecumseh fought as a Brigadier General during the War and when the British were defeated and turned tail to Canada, Tecumseh begged them not to give up the fight.

At the start of the Battle of the Thames in 1813, the British retreated and left the Indians to fight on their own. Finding no aid in their leadership, Tecumseh and his men decided to fight the Americans without the help of the British. Tecumseh died in battle at Chatham, Ontario. His death ended the dream of a unified Indian Nation and an allied Indian resistance to the American settlers.

So, now you know the history of Tecumseh, details of his life and a summary of his legacy.