Why Is Shakespeare Called the Bard?

Did you know there are things we say today that were originally penned by Shakespeare? If you’ve told a friend to “send him packing,” you’re quoting Henry IV, Part One. If you’ve ever said something was “neither here nor there,” you’ve also quoted Shakespeare, from Othello and The Merry Wives of Windsor. (There’s more where that came from; check out this list of words and phrases Shakespeare invented.)

But, isn’t it fascinating to see how certain phrases can sustain centuries upon centuries? Nearly 500 years later, we’re still reading his plays and analyzing his poetry in school. So, why is Shakespeare called the Bard? Is it because he’s the greatest poet that’s ever lived? 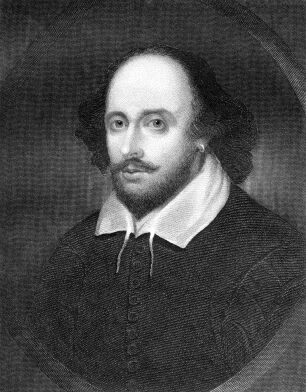 What is a “bard”? Nowadays, “bard” is a title bestowed upon someone who’s considered a great or masterful poet, though it’s much more than a synonym for “poet.” Historically, a bard was someone who enjoyed writing lyrical verses. They were often called upon to recite beautiful prose in eulogies.

In medieval British and Gaelic culture, a bard was employed by a patron, such as a nobleman, to commemorate the patron’s ancestors and praise the patron’s activities as a ruler. The bards prepared poems or stories for such occasions.

Over time, the meaning shifted, referring to a poet who is not only highly prolific, but also very talented and well-known. Shakespeare fits the bill because he reached wide audiences with his reflections on love, loss, tragedy, and more. He encompassed much of our human emotions, tapping into the hearts of medieval people and present-day lovers of poetry.

The Bard of Avon

You may also see Shakespeare referred to as “The Bard of Avon.” This is simply a nod to the town in which he was born: Stratford-upon-Avon. To further enhance your Shakespearean vocabulary, take a look at these seven ways to talk like Shakespeare.

He Was Highly Prolific

Since the word "bard" means poet, we’re essentially calling Shakespeare “the Poet” when we refer to him as “the Bard.” Since centuries upon centuries of poetry enthusiasts concur that he’s one of the greatest poets that has ever lived, it’s only fitting we call him “the Poet.” The bulk of Shakespeare’s work was penned in the latter half of the 16th century. Yet, even today, many of his poems continue to be read, analyzed and studied.

Shakespeare’s sonnets are particularly famed, even to this day. He wrote 154 sonnets which were collected and published after his death. Many of them dealt with love and love lost. You can enjoy all his sonnets at Shakespeare’s Sonnets. The sheer bulk of his writing entitles him to this prestigious title. But, it goes deeper than that. The quality of his prose demonstrates incomparable talent. He employed many rhetorical devices in his prose with utter expertise.

For example, we see wonderful alliteration in Sonnet 30 with this line: “When to the sessions of sweet silent thought…” He also used similes with precision, as in this line from Sonnet 147: “My love is as a fever, longing still for that which longer nurseth the disease.”

There are different forms of sonnets. One form, English sonnets, are also called Shakespearen sonnets. That’s quite the nod.

Most of Shakespeare's sonnets are constructed of three quatrains, or four-line stanzas, and end with a couplet (two lines). This makes up the 14-line sonnet. This form of poetry is still widely used today.

His Influence Lives on Today

Shakespeare has greatly influenced the English language. He created over 2,000 new words and phrases, including “football, “schoolboy,” and “mimic.”

Along with language, there are also a plethora of famous Shakespearean quotes that have lasted through time. Here’s a sampling from both his poems and his plays, demonstrating how he still influences our lives today:

The National Poet of England

Other writers carry the title of “bard.” For example, Robert Burns is known as “Scotland’s National Bard.” This was a title he preferred because he wanted his native land to receive some of the glory. In Australia, Henry Lawson and Banjo Paterson are referred to as “bush bards.”

Shakespeare, however, retains the title of "The Bard" and, certainly, not every “poet” is a “bard.” Much of this can be attributed to his prolific writings, his revolutionary construction of the sonnet, and the fact that many terms within the English language came from Shakespeare’s quill.

Few have churned out poem upon poem (and play upon play) with the same quality and quantity as Shakespeare. As such, he’s also known as The National Poet of England. There, we see the title “The Poet” come to life again. The bulk of his writings were produced between the ages of 29 and 49. In approximately 20 years of writing, he produced one of the largest portfolios of poems and plays. Imagine if he’d lived beyond the age of 52!

When Shakespeare first put his quill to paper, he probably wasn’t expecting to go down in history as the greatest writer of all time, or “the” poet. He simply had a lot to say and a beautiful way to say it. His plays covered all categories - comedies, histories, and tragedies. Likewise, his poems covered all manner of topics.

Have some fun at your next dinner party or classroom lesson with these added tips on Shakespearean vernacular. Be sure to put your quill to paper, too. Perhaps you have it in you to become "the" poet. Allow these tips on writing poems (and a love of Shakespeare) to serve as your springboard to success.