Why Did Mikhail Gorbachev Start Reforming the Soviet Union?

Mikhail Gorbachev served as General Secretary of the Communist Party of the Soviet Union from 1985 until 1991. Before he assumed office, much attention went to building up the nation’s military at the expense of development within the Soviet Union, which ultimately weakened the economy. Gorbachev was instrumental in several reforms which changed the military, cultural and political climates, which eventually led to his downfall. 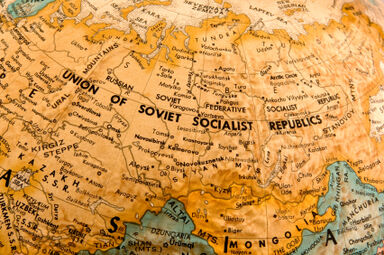 Although the government of the Soviet Union was Communist in name, it didn’t emulate the values and structure of Communism. It reflected a more authoritarian, or even dictatorship, style of government. Citizens were highly controlled, as what they read, watched and said was monitored and their public lives were enforced in a way to prevent rebellion or resistance.

Before 1985, political and social freedoms in the Soviet Union were minimal. Citizens were closely monitored about what they said about their country, as they were not free to openly criticize their nation’s leadership.

What the people knew was monitored too—the press wasn’t free the way it is in the United States, and unfavorable stories about the government couldn’t run. Censorship of other counties film, music and other cultural objects was in effect as well as books that the government found disagreeable with their ideology.

The Soviet Union had been gaining power as a world player in the 1970s and 1980s, but with a new generation being brought up in this strict environment, reform quickly became necessary.

Gorbachev started reforming the Soviet Union by implementing policies to bring about individual freedom, bureaucratic transparency and to stimulate economic change, most notably with the Sinatra Doctrine and Glasnost.

The Sinatra Doctrine allowed East Bloc governments to be more autonomous and self-governing and gets its namesake for the Frank Sinatra classic “My Way.” The name for this policy was said by Foreign Ministry spokesman Gannadi Geraimov during an appearance on the American news show "Good Morning America."

Symbolically, he was allowing previously Soviet-controlled countries to go their own way. Prior to Gorbachev, the Brezhnev Doctrine controlled these satellite countries and maintained that the affairs of these countries should be tightly controlled by the Soviet government in Moscow.

Although this move was met with favor in most of the world, some notable Soviet leaders were unhappy. Erich Honcker, a leader in East Germany, criticized the plan, saying it ended the unity in socialism that the Soviet states shared and maintained that they would become weaker as a result.

Gorbachev implemented Glasnost to make the Soviet Union more free and more in line with other modern industrialized countries.

Glasnost was a set of policies created in the late 1980s to:

The word literally translates to “openness” and signified a new mood and standard of governing that Gorbachev was attempting to bring to the Soviet Union.

Glasnost is much known for allowing a greater freedom of speech to the Soviet people. But the most important aim of this set of policies regarding governmental leadership focused upon making the goings-on of the Soviet government transparent and allowing citizens to discuss, deliberate and debate what the government was doing in a public setting, something that had previously been forbidden.

Glasnost made formerly censored sections of the libraries accessible to the people once again. Restrictions on the press and media were also lightened.

Because individuals were once again permitted to openly criticize their government without fear of harsh repercussions, many citizens began to vocalize their concerns about what they saw as the failure of their authoritarian government.

The Soviet Union’s strict policies over its satellite countries and its citizens at home were ultimately making the once powerful world force weaker and were preventing diplomatic relations with many other countries.

With Gorbachev's introduction of the Glasnost policies, the United States and other countries were more willing to work with and have relations with the Soviet Union, something that had been cut under the strict censorship policies.

Since the media wasn’t under control of the state anymore, they were more free to report resistance and run stories that weren’t in the government’s favor.

More about the true life and work of former Soviet leader Joseph Stalin was uncovered, including mass murder, and the fact that he manipulated his image in the media to appear favorable and to hide his dishonesty in running the state.

Many credit the aftermath and effects of Glasnost as a major key to the fall of the Soviet Union since it:

The plan was for the Soviet Union to become more transparent, and in turn for the leadership of the nation and the Communist Party to be improved. This move brought the Soviet Union closer to freedom and more of a modern nation, eventually leading to the collapse of this formerly strict government.

Reforming how the Soviet government approached the world and itself made it more modern and moved it away from the authoritarian rule of the past, and although the Soviet Union ultimately collapsed in 1991 while Gorbachev was in office, the reforms are generally considered a positive thing for the nation and its people.