Who Was the First Famous Woman Mathematician?

Many would agree that the first famous woman mathematician recorded by history was the Greek philosopher, astronomer, and mathematician Hypatia. Hypatia lived during turbulent times in Greek history and she may be remembered for her violent death as much as for her mathematical work. 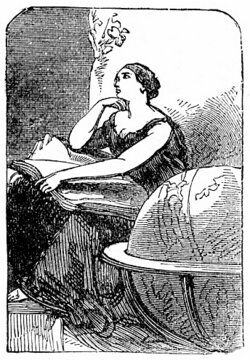 sketch of Hypatia of Alexandria
Advertisement

Hypatia, who can be considered the first female scholar to make a significant contribution to mathematics, was born in Alexandria, Egypt in either 350 or 370 AD. During her life, Christianity was on the rise and those in power in Alexandria became hostile to other faiths and intellectual endeavors.

As you can see from the uncertainty of the date of her birth Hypatia lived such a long time ago that records are sketchy or contradictory. What we do know about her life is that:

Hypatia contributed to and then continued her father's work. There are considerable gaps in our knowledge about exactly what her contributions were. However, some of the contributions that ensured Hypatia's place as the first famous woman mathematician include:

Hypatia was an extraordinary woman for her time: a gifted and respected academic who followed her own path, not the one traditionally expected of a woman. There may have been other works that Hypatia was not credited for, or have been lost over time, however, the contributions we know she made, and the circumstances of her death, cemented her place in history as the first famous woman mathematician. She inspired future mathematicians and was a heroine to Enlightenment thinkers like Voltaire.

For more on the life and times of Hypatia, you can read: https://www.smithsonianmag.com/history/hypatia-ancient-alexandrias-great-female-scholar-10942888/