Who Was Henry P'u Yi? 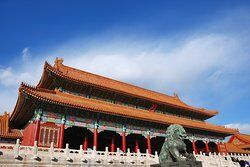 On her deathbed, Empress Cixi chose Qing Yuan Tong Di (also known as P’u Yi) from the Chi'ng Dynasty as the successor to the throne of the Chinese Empire. The Chi’ng Dynasty was not Chinese in heritage but came from the Manchurian region of China. The Manchurians conquered China in 1634. They ruled in China but kept themselves apart from the Chinese people.

Due to his age, his father, Prince Ch’un, served as regent of the throne. In 1911, democracy was declared and resulted in many uprisings among the population. Because of the unrest generated among the populace, P’u Yi was forced to abdicate the throne.

Six years after the revolution, a warlord decided to return P’u Yi to power and encircled the city of Beijing, forcing the current government to accept his demands. Six days after the return to power, the Forbidden City fell under an air raid. P’u Yi was once more forced to resign his position. The forces surrounding Beijing belonged to a different group that had formed a new government.

At the age of thirteen, P'u Yi had only studied history and poetry. He began studies in math, science and other areas of study including English. An officer from the English Colonial Office was chosen to be P’u Yi’s English tutor. The tutor’s name was Reginald Johnson. Johnson became a good friend of the young Emperor and carried much sway with him.

Johnson gave P’u Yi the nickname of Henry and that name stuck with him throughout the rest of his life. Henry was installed to rule Manchukuo as the Emperor. He was under the direct rule of the Emperor of Japan.

During the installation ceremony, Henry had a dispute with the Japanese Emperor over fashion and over the uniform that he would be required to wear. He felt that it was insulting to wear anything except traditional Ch’ing dynasty robes. He compromised and wore a Manchukuo uniform to his enthronement and his family dragon robes to the announcement of his ascension at the Altar of Heaven.

Much of his rule under the Japanese Emperor he served as a puppet to bring the country under stronger rule of Japan. He was essentially a figurehead. All laws that were presented for his signature were made by Japan and meant to cement the control of Japan over the region.

As Henry was fleeing Manchukuo in 1945, he was captured by the Soviets and imprisoned in Siberia for the next five years. He was then repatriated to China and sent to re-education camps by Mao Zedong. Following his re-education, he was allowed to become a citizen of the state. He then was allowed to write his autobiography telling the tale of his early life and conversion to belief in the communist doctrine.

Henry’s Role in the Fall of the Chinese Dynasties

Looking back on his life as the last ruler of the Ch’ing dynasty, Henry played a pivotal role in altering the government of China from a monarchy to a republic. The republic was converted to communism later in history but, due to Henry’s young age, it was easy for the opponents of the dynasties to overthrow his position.