Who Is Thomas Hobbes?

Thomas Hobbes was an English writer and philosopher famous for the book Leviathan, which was a statement of his combined political and religious beliefs published in 1651. 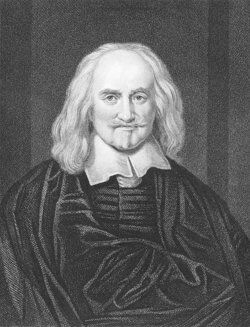 Thomas Hobbes: More Than a Writer

In addition to being a writer and philosopher, Thomas Hobbes was a rationalist and studied the behavior and thoughts of human beings. He based his belief systems on deductive design theories and metaphysical reasoning, which was somewhat unusual at the time when most English scientists were focusing on the empirical method of researching and building theories.

Knowing about Thomas Hobbes' background is also interesting. Hobbes was born in 1588 and was raised primarily by his wealthy uncle, entering Oxford College at age 15 and working as a private tutor upon graduation.

At age 19, he and his tutoring charge (who was more or less the same age as Hobbes) took a trip across the European continent. This trip opened Hobbes’ mind to the studies of history. He published his first work, a translation of an ancient history text, in 1629.

In the following years Hobbes began to open his studies to include science and mathematics, particularly the ideas of principles of motion contributing to the cause of all things. This was a departure from the thought of the time, which largely fell under the belief system posed by Aristotle, i.e. that all things were propelled by an inherent urge for fulfillment.

Hobbes instead focused on the ideas of physics and mechanics and the properties of motion; in other words, he took a departure from popular philosophy to instead examine scientific deduction.

No explanation of who Thomas Hobbes is would be complete without understanding his major theories. Hobbes eventually formed a grand theory of societal behavior based on these studies, and he began publishing works on the monarchy and political system of England as well.

As British political tensions became heated, Hobbes decided to retreat to Paris for awhile after his works were published and he stayed there for approximately ten years.

The publication of his book Leviathan: the Matter, Form, and Power of a Commonwealth, Ecclesiastical and Civil took place in 1651. This was Hobbes’ masterwork, although at the time it did not have the effect Hobbes had expected it to have. In fact, it angered some Royalists and led to Hobbes choosing to return to London, where he settled again.

His works continued to create controversy for the rest of his life. Hobbes was banned from printing any writings on social issues for the last years of his life because of the fervor they tended to stir among both religious and political factions.

He ignored the ban, publishing Behemoth: The History of the Causes of the Civil Wars in England, in 1679. He also died later that year, thus sparing him the anger of the offended.