Stacey Abrams is a name that is often mentioned in news headlines and discussed in political conversations. Are you wondering, "Who is Stacey Abrams?" Her impressive background includes experience as an activist, politician, attorney, and published author. Review this brief overview of Stacey Abrams' bio for highlights of her experience and accomplishments. 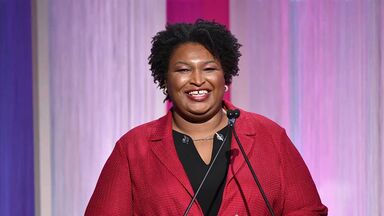 CEO and Founder of Fair Fight

Stacey Abrams and Fair Fight are credited with having a significant impact on the results of the 2020 Georgia Senate races, in which Democrats Raphael Warnock and Jon Ossoff defeated two incumbent Republican senators.

In 2017, Stacey Abrams resigned from her seat in the Georgia House of Representatives in order to run for governor in the 2018 election. She won the Democratic nomination, becoming the first Black woman to ever be the gubernatorial nominee of either major U.S. political party. Abrams faced Republican nominee Brian Kemp in the General election. Ultimately, Kemp won the election, receiving 50.2 percent of the vote to Abrams' 48.8 percent.

Stacey Abrams served in the Georgia House of Representatives for ten years, from 2007-2017. For part of that time (2011-2017), Abrams served as the House Minority Leader for the Georgia General Assembly. She was the first woman to serve as leader for either party in the General Assembly. She was also the first African American to lead the House. She served on several committees during her time in the state legislature.

Before being elected to the Georgia House of Representatives, Abrams had significant work experience in the public and private sectors. She has been involved in several entrepreneurial ventures. Highlights include:

Stacey Abrams is a New York Times best-selling author. She has works of fiction and nonfiction to her credit.

Stacey Abrams has written three books under her own name since 2018. The first two titles, Lead from the Outside: How to Build Your Future and Make Real Change (2018) and Our Time Is Now: Power, Purpose, and the Fight for a Fair America (2020) are nonfiction. While Justice Sleeps: A Novel (2021), is a fictional thriller set in the Supreme Court halls.

Between 2001 and 2009, Stacey Abrams published eight romance novels under the pseudonym Selena Montgomery. The earliest titles are out of print, but several remain available in paperback and Kindle formats.

Stacey Abrams was born in Madison, Wisconsin in 1973 to Robert and Carolyn Abrams. The couple had six children; Stacey was the second oldest. Robert was a dockworker and Carolyn was a school librarian. The family moved to Mississippi when Stacey was a small child, then relocated to Atlanta when she was a teenager.

Abrams' parents stressed (and modeled) the importance of education, service and taking care of one another. In Atlanta, Robert and Carolyn Abrams both attended graduate school and became ordained ministers in the United Methodist Church. Stacey's parents later returned to Mississippi to work as ministers. Stacey left Atlanta for graduate school, but returned to Georgia after graduation, where she remains. Abrams is single and does not have children (as of early 2021).

Highlights of an Impressive Career

Stacey Abrams' full career involves much more than what is discussed in this brief list of some of her most impressive experiences and accomplishments. Her work promoting voting rights and progressive politics is expected to continue and expand in scope and influence. She was nominated for a Nobel Peace Prize in February 2021 for her work promoting voting rights and registering voters. Discover some examples of civil rights to understand some key issues related to the work of Stacey Abrams and Fair Fight in the quest to protect voting rights and the principles of democracy.