Who Is on Mount Rushmore? Behind the Faces of 4 Presidents

Mount Rushmore is a famous American monument and popular tourist destination in the Black Hills of South Dakota. But whose heads are carved into the enormous mountain, and why were those particular people chosen? The answers lie in American history and its ongoing pursuit of democratic ideals. 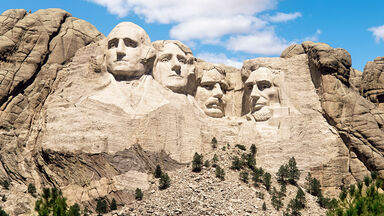 What Presidents Are on Mount Rushmore?

The four heads on Mount Rushmore depict the four American presidents most influential in the expansion of the United States — George Washington, Thomas Jefferson, Theodore Roosevelt, and Abraham Lincoln. According to sculptor Gutzon Borglum, these presidents exemplified the exceptionalism of the growing country and its Manifest Destiny — the belief that expanding the U.S. was destined by God.

A founding father and the first president of the United States, George Washington is the most prominent of the four faces on Mount Rushmore. Not only did Washington help win the American Revolution as commander in chief, but he also laid the groundwork for American democracy and established a peaceful transfer of power. Borglum wasn’t the only artist who considered Washington’s likeness to be important; George Washington is also featured on the U.S. dollar bill and 25-cent coin.

To the right of Washington is Thomas Jefferson, one of the authors of the Declaration of Independence and third president of the United States. Jefferson’s work to establish and reinforce American democracy was significant on its own, but his role in the Louisiana Purchase nearly doubled the size of the United States. Borglum saw this accomplishment as pivotal for the expansion that would ultimately bring American borders to the Pacific Ocean.

Theodore “Teddy” Roosevelt became president in 1901, 100 years after his Mount Rushmore neighbor, Thomas Jefferson, took office. While the 26th president was no founding father, Borglum (who actively campaigned for Roosevelt in 1912) saw him as a key figure in American expansionism. Roosevelt’s work in creating the Panama Canal, busting monopolies in the American economy and conserving valuable public lands set a successful tone for the United States at the turn of the 20th century.

The final face enshrined in Mount Rushmore is Abraham Lincoln, the 16th president. By preserving the Union during the Civil War, Lincoln carried the Founding Fathers’ vision of the United States forward. By issuing the Emancipation Proclamation, he ensured that Jefferson’s immortal words “All men are created equal” applied to every American citizen, no matter their race. Like the other three presidents on Mount Rushmore, Lincoln’s steadfast leadership strengthened the country.

The Creators of Mount Rushmore

The men who inspired Mount Rushmore are an enduring part of American history. But what about the people who planned and built the giant monument? Learn more about those who brought the massive vision to life.

Originally Tunkasila Sakpe Paha, or “Six Grandfathers” in the Sioux Nation, the mountain was renamed after New York lawyer Charles E. Rushmore arrived in the Black Hills in 1884 to meet with prospectors at a tin mine. He spent a considerable amount of time with the men and became quite fond of the mountain during his visits. As Rushmore claims, one of the prospectors unofficially named the mountain after him, but the name officially remained.

Historian Doane Robinson, known as the “Father of Mount Rushmore,” first conceived of the project as a way to draw people to South Dakota. He envisioned the site as a tribute to heroes of the Old West, including Lewis and Clark, Buffalo Bill Cody and Sioux chief Red Cloud. In 1924, he reached out to sculptor Gutzon Borglum to discuss the monumental project.

Gutzon Borglum, who had been previously working on a mountain statue of Confederate leaders in Stone Mountain, Georgia, accepted the project at Mount Rushmore. However, Borglum felt that the mountain should include the images of American presidents rather than Western heroes, as the presidents may appeal to a larger audience outside the West. He began work on the project on October 4, 1927.

Gold Miners and Workers: The Craftsmen

Nearly 400 laborers worked on the monument over the span of 14 years. Mostly miners by trade, these men and women placed dynamite for blasting the mountain’s surface, drilled holes into the granite to weaken it, and operated jackhammers to clear away jagged stones. The project was dangerous due to its extreme heights, but there were no fatalities during construction, and workers were especially grateful to have a job during the Depression.

The planning and sculpting process of such a large monument was not without its dramatic moments or twists of fate. Learn more about the construction of Mount Rushmore — and its controversial place in American history.

The Controversy of Mount Rushmore

Carving 60-foot heads of national leaders into the side of a mountain symbolizes the strength of their collective legacies. But not everyone sees Mount Rushmore as a positive symbol of America — and at the time, many saw its construction as a symbol of the country’s overreach and controversial acquisition tactics.

The mountain that houses the four American presidents’ images is not just important to American settlers and their descendants. The Lakota tribe of the Sioux Nation considered Tunkasila Sakpe Paha to be a sacred place for prayer.

In 1868, the United States government signed the Treaty of Fort Laramie with the Sioux Nation. The agreement recognized that the Black Hills, where current-day Mount Rushmore resides, belonged to the Sioux people alone. However, only six years later in 1874, General George Custer laid claim to the hills when gold was discovered there. The U.S. confiscated the land in the Agreement of 1877, which moved the remaining Black Hills Sioux into reservations.

The rights to the Black Hills and Mount Rushmore are still in contention today. Many people, including Gutzon Borglum’s great-granddaughter, have called for Mount Rushmore’s removal. Others support the construction of the Crazy Horse Memorial in the Black Hills just 17 miles away as a tribute to the Lakota people. However, the issue is far from settled, as Mount Rushmore symbolizes two very different interpretations of American history and expansionism.

A Legacy Larger Than Life

The four presidents on Mount Rushmore are revered by many for founding, expanding, conserving, and unifying the U.S. Though a modern lens may scrutinize the actions of these men and the sculptors who placed their likenesses on sacred ground, there is no doubt that American democracy was built upon their legacies. For more U.S. monument history, check out a few facts about the Lincoln Memorial in Washington, D.C.