Who Is George Mitchell?

George Mitchell has accomplished some extensive feats throughout his life, both as a businessman and as a politician. As a democrat, Mitchell tends to lean towards the left. He’s highly educated, and possesses both a J.D. and an honorary LL.D. 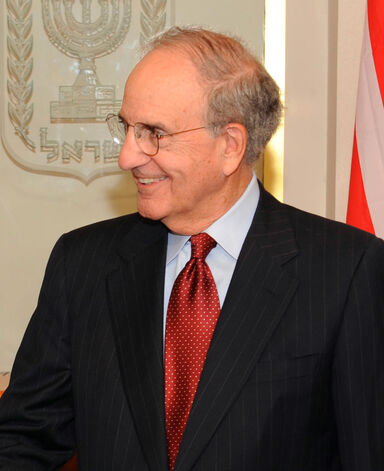 Childhood and Adolescence of George Mitchell

George Mitchell was born in Maine. His father, George John Mitchell, was of Irish descent but had been adopted by a Lebanese family. He worked as a janitor at a college. His mother, a textile worker, was Mary Saad. His parents raised him as a Maronite Catholic, and his family attended church regularly. The Mitchell family had four boys, and one girl.

At Bowdoin, Mitchell was outgoing and successful. He continued his love for sports, and he played on the Bowdoin basketball team. He worked a number of jobs throughout college to help pay for school, as well as to have extra spending money. He graduated from Bodwoin in 1954 and wanted to attend graduate school, and hopefully work as a professor.

However, Mitchell changed his mind and decided to enroll in the Army instead. He served on the United States Army for two years, and quickly rose to First Lieutenant by the end of his service in 1956. After serving on the army, Mitchell decided to attend law school. He graduated from Georgetown Law in 1961. At law school, he received high marks.

After he graduated from law school, Mitchell took a job as a trial attorney for the Antitrust Division of the United States Department of Justice. He remained a trail attorney until 1962, and then he took a job as the executive assistant for Senator Edmund S. Muskie for three years. The second job sparked his interest in politics. After 1965, Mitchell moved back to Maine and practiced law in Portland, Maine.

In 1974, the Democratic Party in Maine nominated Mitchell to serve as the governor of Maine. Unfortunately, Mitchell lost the election to James B. Longley, who was an independent candidate. However, in 1977, Jimmy Carter appointed Mitchell as the United States Attorney for Maine. This was an extremely prestigious appointment.

Mitchell finished the remainder of Muskie’s term, and was elected for another term in 1982. He won over 60% of the vote in Maine, and defeated David Emery who was a congressman in Maine.

He became Chairman of the Board for Walt Disney in 1995 until a replacement was found in 2007. At this point Mitchell was asked to lead the investigation on steroid use in major league baseball, an investigation which concluded with a report in December 2007.