Who Is Euclid and What Did He Do?

Anyone interested in Greek history, ancient cultures, mathematics, physics, and natural sciences might be interested to learn about Euclid and his accomplishments. He is mentioned in nearly every mathematical textbook, and he is referenced in lots of historical texts and scientific texts as well. He is credited with developing many ideas, but first and foremost, he is understood to have been one of the greatest thinkers of all time. 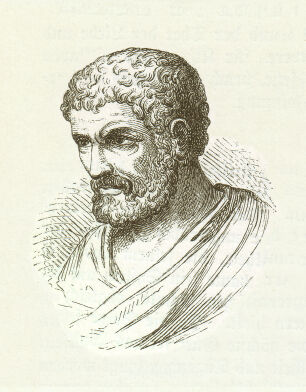 Euclid and His Accomplishments

Euclid’s story, although well known, is also something of a mystery. He lived lots of his life in Alexandria, Egypt, and developed many mathematical theories. He is most famous for his works in geometry, inventing many of the ways we conceive of space, time, and shapes.

He wrote one of the most famous books that is still used today to teach mathematics, Elements, which was well received at its time and also is praised today for its thought and understanding.

This wasn’t the first time that people were writing about mathematics, and many other people developed some of the theories he presented in his text. However, what is most important to remember is that he was the first person to write a complete, coherent review of all geometry theory as he understood it.

Euclid As the Father of Geometry

A common misconception is that Euclid invented all concepts of geometry. This is certainly not so, as he really only pulled together ideas and developed them as his own within a textbook. However, he definitely developed the discipline in this regard, making it a concrete, organized study that people could learn from by following his written work.

He is also famous for his theories on other parts of life: in Optiks, he discusses perspective and gives insight to how we view the world through our eyes.

With geometric principles, other mathematicians in later centuries were able to develop upon his work. In this regard, he is understood to be the Father of Geometry since he paved the way for so many future thinkers to expand upon his organized ideas. Other thinkers have even used his geometric method as a foil, in which they have expanded thought in a completely different direction.

Euclid As a Scholar of Ancient Greece

Today, we understand Ancient Greek culture as classical, in which thought, discussion, mathematics, sciences, and the arts developed and flourished as never before within Greece. Euclid was a part of that culture.

Euclid existed around 300 BC, and he was a prominent figure in Greek culture at the time as a thinker and scholar. He was part of a new tradition of questioning thought, understanding the changing world, and developing ideas so that we could better understand the patterns in the world around us. He, among other Ancient Greek scholars, has left a legacy of thought that many scholars and academics today continue to follow.

Like many of the best thinkers of our human history, many elements of Euclid’s life remain mysterious to us. He was in no way documented biographically, at least in terms of detail and depth. He was mentioned by several other Greek thinkers, such as Pappas of Alexandria. Praclus is also known to have written about him. These quotes about him are also not certain, since much history about scholars was in fact legend and myth in the times of Ancient Greece.

Historians today certainly try to reconstruct his life history and better understand his work in contexts that we are now aware of today – a man of such impact during his time is still recognized today as a hero of thought. For more information on Euclid you can read directly from his textbook Elements, which is available at amazon.com.