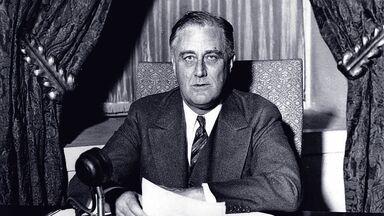 What president served more than 2 terms? The only president to serve more than two terms was Franklin D. Roosevelt (FDR). He started his first term as president in 1933. In 1940 he won the election for his third term. Four years later, in 1944, he ran again and became the only president to be elected to a fourth term. However, he was just a few months into his fourth term when he suffered a cerebral hemorrhage and passed away on April 12, 1945.

Why was Franklin Roosevelt the only president to serve 3 terms? Although there was no formal legislation before 1947, there was something that restrained others from attempting to remain in the presidency any longer. Perhaps it was the fact that George Washington did not seek re-election after 2 terms. Whether that was because he was getting older or because he really felt that a person should not be president for any longer may not be known. Either way, he had set an example for future presidents.

Why Was Roosevelt a 3 Term President?

Roosevelt was able to remain president for so long because the country was in a state of turmoil — World War II and the post-Depression Era — and he was a popular and reliable figure the people felt could lead them during their weakened times. Explore a few highlights of Roosevelt's presidency.

Known as FDR by many, he will always be remembered for igniting hope in the millions of people in the United States who were suffering from the consequences of the Great Depression. One of his most well-known programs was the New Deal, in which he started a chain of events to stimulate the economy. The New Deal attempted to provide relief to the unemployed by promoting spending and created social welfare programs. It was successful at first, and the economy was booming; however, by 1937, a recession began.

Roosevelt provided money to China and Britain during the war and gave aid to countries fighting against Nazi Germany. Although he had tried to remain somewhat neutral and allow the rest of the world to do the fighting, he could not stay on the sidelines any longer after December 7, 1941. Once the Japanese attacked Pearl Harbor, he convinced the country to join the allies in World War II.

Other Presidents Attempted and Failed a 3rd Term

Although FDR was the only president to get reelected three times successfully, other presidents had tried to hold the position for more than two terms.

In 1880, after a three-year break from the presidency, Ulysses S. Grant attempted to run again. However, he did not win his party's nomination, so he was not even a choice in the final election.

Woodrow Wilson also hoped for a 3rd term during a deadlocked 1920 convention but didn’t make it. Wilson wasn’t able to get the Democrat party to stand behind him and secure the nomination.

Theodore Roosevelt became the president when William McKinley was assassinated. He then served as president from 1901-1909. Three years later, he tried to become the president again; however, he lost to Woodrow Wilson.

Discussions on limiting presidential terms began in 1944 when Roosevelt ran for his fourth term. In 1947, President Harry S. Truman proposed the Hoover Commission, which recommended that no president be allowed to serve more than two terms.

One of the reasons for such a proposal was that many people felt that allowing more than two terms was a threat to democracy and would, in fact, lead to a sort of monarchy. So many lives were lost, and so much time and effort were spent fighting in the Revolutionary War to be free of the monarchy that the people certainly did not want to revert to those days.

As a result of that proposal, the 22nd Amendment to the Constitution was formed, limiting the number of terms that a president may serve to 2. The amendment was passed by Congress on March 21, 1947, and was ratified on February 27, 1951.

While Congress members, periodically, have made efforts to repeal the 22nd Amendment, none of these efforts have made it out of committee. Therefore, FDR is and will remain our only 3 term president. However, you don’t have to stop your exploration of types of democracy here. Instead, you might want to look at examples of democracy. You might also want to explore some other unusual facts about presidents. Keep your presidential education going by learning which president spoke English as his second language.