Where Was Mikhail Baryshnikov Born?

Mikhail Baryshnikov is considered one of the preeminent ballet dancers and instructors of the 20th century. His performances and dance direction since his relocation to the United States are legendary, among the best ballet performances of our time. Baryshnikov melds an eccentric personal dancing technique with his love for both classical and modern ballet, creating an irresistible form of contemporary dance that has often been emulated, but never fully duplicated. 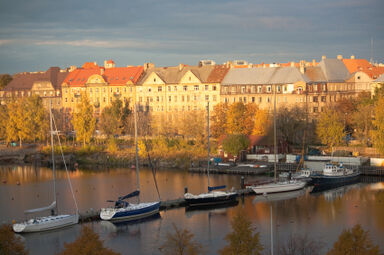 Baryshnikov was born in a city known as Riga. When he was born, this city was part of the Soviet Union, the communist country that covered modern Russia and many of the outlying countries surrounding it.

Riga is now a city in the nation of Latvia, a commercial and industrial center to the Baltic region, known for its German art nouveau architecture and its history as a Viking trade route.

Riga, and the larger region of Latvia, have been in flux for centuries. When the crusades broke out, portions of Latvia were claimed by the Germans, and from the 1500s through the 1700s (during the period of the Reformation), various nations claimed ownership of portions of Latvia. When the Russian empire laid a claim to Latvia, the country was stable for a time until it declared independence following the devastation brought on by World War I.

The country in which Baryshnikov was born ultimately ended up under the control of the Soviet Union following World War II. It wasn’t until the 1980s when Latvia would regain its independence.

Under the perestroika policies of Mikhail Gorbachev, Latvia was restored in 1991 once the Soviet Union formally dissolved. Industrialism and immigration of individuals from other parts of the large nation of the former Soviet Union began growing the country.

Latvia experienced international recognition in 2004 when it was formally recognized as a member of both NATO and the Eurpoean Union, two prestigious international coalitions made up of countries working toward world peace and unity.

The city hosts six different administrative regions, serving as the functioning heart of economy and politics. The official Science Academy of Latvia is home to the best minds raised in the region. Although the population of Riga has declined over the past couple of decades, it remains the largest city in all of the Baltic States, and a center of culture and commerce.

From 1960 through 1964, Baryshnikov studied the art of dance in Latvia, the city in which he was born in 1948. As he continued his work throughout the former Soviet Union, it became apparent that this dancer would far exceed the expectations of his teachers and his peers.

His talent became known throughout the world even as he danced across the Soviet Union, garnering admiration from critics across Europe and as far away as the United States of America.

In the mid 1970s Baryshnikov formally broke from his Soviet ties, seeking asylum in Canada and finally announcing that he refused to return to the Soviet Union. Although Baryshnikov would revisit his city of Riga in Latvia, he would never reside again in the town in which he was born.

The American Ballet Theater and the New York City Ballet, two of the most prestigious dance companies in all the world, allowed him to join their ranks through the 1970s.

By 1980, the dancer had all but retired, instead focusing his energies on directing. While he would continue dancing on some level—even to critical acclaim—his skills as a dancer were now translated into ballet directing acumen, a skill that has lasted him well into the 21st century.