When Was JFK Elected? A Look at the 44th Presidential Election

Many years after John F. Kennedy's (JFK) assassination, the influential leader and his family continue to make headlines. Discover when was JFK elected and gain insight into the presidential election that he won. 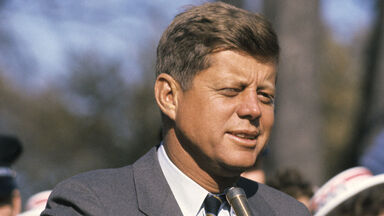 When Was JFK Elected President?

John F. Kennedy was elected president on Tuesday, November 8, 1960. Kennedy defeated Richard M. Nixon with 303 electoral votes to Nixon's 219. Even though this seems to be a resounding victory, it's important to note that this represents only a narrow margin in the popular vote.

Kennedy received only 119,450 more individual votes than Nixon. This resulted in a victory decided by only a very small margin among individual members of the electorate. Kennedy's narrow wins in Texas and Oklahoma are credited with providing him the electoral votes needed to put him over the 270 threshold required to win a United States presidential election.

When Did JFK Become President?

John F. Kennedy was officially sworn in as president a little more than two months later, on January 20, 1961. This is the date he actually became president. Kennedy's inauguration speech featured one of his most widely recognized and often-repeated quotes, "Ask not what your country can do for you — ask what you can do for your country."

Of course, this is not the only quote JFK is known for saying. Get a stronger sense of what he stood for by reviewing an extensive selection of quotes from John F. Kennedy.

Facts About the 44th Presidential Election

How Long Was JFK in Office?

President John F. Kennedy served in this role for less than two years. JFK was assassinated on November 22, 1963. He became, and remains, the youngest sitting president to die while in office.

After Kennedy was assassinated, Vice President Lyndon B. Johnson succeeded him as president. Spiro Agnew was appointed to serve as vice president to fill the vacancy left in that role when Johnson stepped into the presidency.

From a large Catholic family, John F. Kennedy was the second-oldest of nine children. His parents were Rose and Joseph Patrick Kennedy, who at one time served as the U.S. Ambassador to Britain. He was married to Jacqueline Bouvier Kennedy (later Onassis), who served as First Lady while JFK was in office. While JFK was not the only member of his family to hold public office, several of his siblings followed different paths in life. Learn who JFK's siblings are and discover a few key facts about their lives.