When Did Thomas Crapper Die?

Thomas Crapper was the founder and owner of one of England’s largest sanitation engineering firms. One urban legend even suggests that Thomas Crapper invented the toilet; but, however funny that may seem, it is sadly not true. John Harrington invented the flushing toilet in 1596.

Thomas Crapper did, however, make a number of improvements on the first toilet model made. He was an inventor and maintained a foundry and metal shop in his business and he was able to try out new designs and develop ways of making plumbing solutions more efficient.

Thomas Crapper died on January 27, 1910 in Anerley, England when in retirement, after having made many key inventions in sanitary engineering. 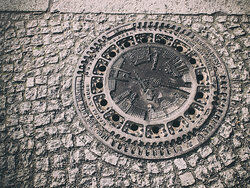 Thomas Crapper and the Toilet

Thomas Crapper was baptized on September 28, 1836. At the age of eleven, he began his career as a plumber when he travelled to London to become the apprentice to a Master Plumber.

After serving as an apprentice and a journeyman for three years, Thomas set himself up as a sanitary engineer in 1861. He equipped his shop with a brass foundry and workshops. These facilities allowed him to fabricate special items he needed for jobs and with a place to fabricate and test new inventions.

Thomas was the first plumber to set up a showroom for customers to view and select fixtures for the work he would perform on their bathrooms. He was a strong advocate of sanitary plumbing and became known widely due to that fact.

His experience was well known in the London area and he became the friend of Prince Edward and Prince George during the years about the turn of the century. He received a number of Royal Warrants to perform renovations to the bathrooms at some of their properties.

Thomas was an inventor by nature and worked on devices to improve the operation of the toilet. During his lifetime, he was awarded nine patents for devices to be used in his profession as a sanitary engineer.

Of each of the nine patents for which Thomas applied, he was granted the patent. He owned and operated his company until 1904 when he retired. By the time of his retirement, he had two showrooms and just after his retirement, the company opened the third and most famous showroom on King’s Road in London. He sold the business to his son and a partner who continued the business until 1966.

Thomas’ contribution to the field of sanitary engineering and the selling of plumbing supplies through his showroom have been a great boon to the business. His inventions have made the toilet function better and have prevented the foul smell of waste products filling our houses and businesses.

In some parts of the world, there is even a holiday to celebrate Thomas Crapper and the invention of the ballcock. Thomas Crapper Day is celebrated annually on January 27th, the anniversary of his death.