When Was Saint Seraphina Canonized? 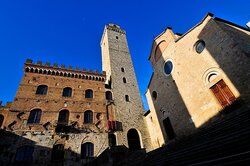 Despite the fact that she was a wonderful woman who devoted herself to Christ, she never became a Saint. A very specific process is in place for the canonization of saints; so, whether Blessed Seraphina did not live up to the standards or she just has never come up for canonization, the reason is not known.

She is technically known as Blessed Fina, since her name was Fina dei Ciardi. She was born in 1238 in San Gimignano in Italy. She only lived for 15 years, but she made herself known in those years. Not much is known about her early life, except from legends that came about after she died. She did not live in poverty, but her family was not rich either. Legend has it that she only left her house to go to Mass.

When she was ten years old, she became very ill. At the time, what disease she had was relatively unknown. However, she started to become paralyzed, and she was extremely ill. She kept her faith strong and she prayed to God, and through that power of prayer, she felt she was OK. Even when she was offered a bed to lie on, she wanted to rest on a wooden table to which parts of her body became stuck.

While she was suffering, both her father and her mother passed away. Still though, she kept praying to God for comfort and that she might die so she could go on to Heaven to be with the Lord, Jesus Christ.

Shortly before she died at the age of 15 years old, she saw a vision of Saint Gregory, who told her that she would pass away on his feast day. Indeed, she did pass on that very day, March 12.

Upon her death, the Church bells of San Gimignano rang out without anyone having touched them.

Fina was detached from the wood and a beautiful fragrance filled the house and white violets grew from the table. These flowers still grow in San Gimignano today, and they are now known as the "The Saint Fina Violets."

Many people came to see her body after she died. Of these people, quite a few of them were suffering disease or other ailments. However, when they approached her body, they were miraculously cured of their inflictions. Her healing power lived on. As the years progressed, sick people who came to visit her grave were cured of their problems.

Maybe you are a skeptic. Yet how else can we explain these mysteries other than that they are the products of a young girl who devoted her life to God and Jesus Christ?