When Did Jackie Onassis Die?

Jackie Onassis, also known as Jackie Kennedy, is perhaps one of the most fascinating first ladies that the country has ever had. However, how much do you really know about her life and her past? 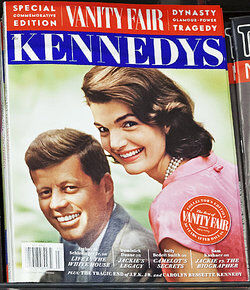 In 1963, the First Couple began a political trip through Texas that was intended to stop in San Antonio, Houston, and Fort Worth. After breakfast, they began the car ride to the Trade Mart, at which the President was scheduled to speak. It was during this car ride that John Kennedy was assassinated. Jackie later had almost no memory of the immediate events after her husband was shot.

After her husband was assassinated, she continued an active role in politics and the government. In 1993, she was diagnosed with non-Hodgkin's lymphoma, a form of cancer. She died on Thursday, May 19 in 1994. She is buried next to JFK in Arlington National Cemetary.

Jackie Onassis was born in Southampton, New York. Her father was a Wall Street stock broker named John Vernou Bouvier III and her mother was Janet Norton Lee. She had a younger sister named Caroline Lee.

Her parents separated in 1936 and divorced in 1940. Her mother remarried in 1942 and Jackie gained two half siblings (a brother, and a sister).

As a young child, she loved horseback riding, reading, and lacrosse. She went to Vassar College in New York, and spent her junior year abroad in France.

When she returned home from France, she transferred to George Washington University and graduated with a bachelor’s of arts in French literature. She secured a job as a photographer for The Washington Times-Herald after graduation.

She met John Kennedy in 1951 because she and he often attended the same social functions. In 1952, Jackie and John Kennedy, now the newly-elected senator from Massachusetts, were formally introduced by mutual friends. This sparked an interest between the two and they began to date shortly thereafter.

In 1953, their engagement was announced. They married on September 12, 1953 in front of almost seven hundred guests. The reception was at Hammersmith Farm, and it is estimated that over one thousand individuals were invited. They honeymooned in Mexico. After they returned, they settled in McLean, Virginia.

Jackie had significant problems conceiving and carrying a child when the two were first married. In 1955 she miscarried, in 1956 she gave birth to a stillborn child and in 1963 she gave birth to a son who died three days later. Jackie was able to give birth to a daughter (Caroline) in 1957, and then a son (John Jr.) in 1960.

The couple moved from Virginia to the Georgetown section of Washington, D.C. In 1960, John Kennedy announced his candidacy for the presidency and began his campaign. Jackie discovered that she was pregnant shortly after, and thus was not able to take as active a role as she wished in the campaign.

Kennedy won the election by beating Richard Nixon, the Republican candidate. Two weeks after Kennedy was sworn into the Presidency, Jackie gave birth to John, Jr.

As a First Lady, Jackie primarily planned social events at the White House, and other state functions. She was known to invite writers, artists, and painters to the White House to meet politicians, diplomats, and statesmen. She began the project of restoring the White House.

She wrote personal requests to individuals that had furniture of historical significance and requested that this furniture be donated to the White House. She was successful in a number of her requests.

Jackie remarried in 1968 to Aristotle Onassis, a wealth Greek shipping magnate. After Onassis died in 1975, Jackie became a book editor where she continued to work until 1994 when she began treatment for non-Hodgkin's lymphoma.