When Was Hiawatha Born?

The culture and history of the indigenous people of North America includes visionary leaders like Hiawatha. Hiawatha was an early statesman, lawgiver, shaman and unifier of the territory between the Mississippi River and the Atlantic Ocean. 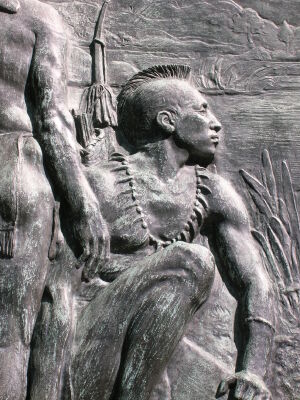 It is reported by some sources that Hiawatha was born around 1550 A.D. He was born in the Mohawk tribe but fled to the Onondaga tribe when the people of his own tribe did not believe his teachings.

Hiawatha is credited with the unifying of the five Indian Nations that lived in the region of the Northeast of America. Hiawatha was also included as a character in the spiritual teachings of Onondaga Indians.

The history of the five tribes is told in a legend about the Great Spirit. The Great Spirit was awakened from his slumber by the moaning and groaning of the men on Earth. They were living in fear of monsters and man-eating giants.

The Great Spirit turned himself into a human and left the heavens to come guide the people. He led them to a place of safety, and after they had recovered their spirit and strength, and raised children that were strong, and handsome, he led them to a place of two great rivers. The falls of the rivers sent mist up into the air and they built a longhouse there for his people. He told them that they needed to go out into the surrounding lands and found great nations and that he would make them as numerous as the pebbles on the shore of the great waters.

He headed west and all the people followed him. After a long journey, they stopped by the banks of a beautiful river. He instructed the few families to build a longhouse in that place and said that they would become known as the Mohawk. From the time of their naming, they no longer understood any of the other people.

He taught them all that they would need to survive and flourish. He taught them the ways of the forest and hunting game. He gave to them beans, corn and squash. He taught them how to plant crops and reap the harvest and then how to pound corn into meal to make cakes. Preparing them well to survive, he took the rest of the people further on towards the setting Sun.

The Great Spirit repeated the same process with the other people, founding the other four tribes:

To each of the tribes he gave a special gift to help them.

After a long time of peace, an enemy stuck the land from the North. They destroyed all that they met and the five tribes came to Hiawatha to save them. He told them to gather all the tribes in a place that the invaders had not yet reached. He would meet them there.

In a few days, he and his daughter arrived at the lake. He told the people that they needed to join together and be one great tribe. Each of the five nations would have a special responsibility, based on the gifts that he had given them in the past. They would be able to defend themselves from all those that came from the North. Once joined together, they would be strong and able to stand against their enemies. They would then be known as the Iroquois.

Hiawatha yielded his daughter to the enemies of the North and after she had gone, he too left them. His mission was finished.