When Did Henry Hudson Die?

No one is sure when exactly Henry Hudson died, but he most likely died in 1611 in Hudson Bay. 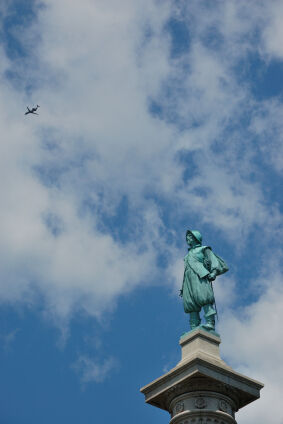 On Hudson’s final voyage from England in April 1610 to find a northwest passage through the North American continent, he found a large body of water that he thought was the Pacific Ocean. However, it was only a large bay, later to be named Hudson Bay.

Hudson continued to sail down the Canadian coast until he hit the southern point of Hudson Bay at James Bay and found there was no western passage. The ship was stranded in James Bay over the winter by harsh weather. Tensions ran high and some of the crew members grew hostile.

By June 1611, the ship was able to start the journey home. On June 22, 1611, the crew mutinied, put Hudson, his son, and several other crewmen in a small boat, and left them in Hudson Bay. No one knows what happened to them. It is assumed that they died soon after that.

It is believed that Henry Hudson was born around 1565. That date is only approximate; it could go several years either way. Very little is known of his life until 1607. He is thought to have lived in London. He must have been a knowledgeable and experienced navigator to be given financial backing for a risky journey.

There is a possibility that he sailed with John Davis, who was the first to look for a northwest passage, in 1587. Some think he served on an English ship fighting the Spanish Armada in 1588.

Hudson was an experienced mariner, as recorded in his first voyage in 1607. He was hired for the hazardous task of finding a shorter route to Asia than the current one around Africa.

In Henry Hudson’s day, it was believed that there would be an ice-free passage around the North Pole in the summer months. He was employed by the Muscovy Company to find that route to the Orient. On May 1, 1607, Hudson, his son, and 11 other crew members set sail and, after six weeks, saw the east coast of Greenland. At the end of June, they reached West Spitzbergen Island, spotting many seals, walruses, and whales along the way.

Mid-July found them at Collin's Bay, which is 750 miles north of the Arctic Circle. By the 16th, they were starting to see many icebergs, and on the 31st, with the route north of the Svalbard archipelago blocked by ice, the ship began the return trip to England.

Information about the whales, seals and walruses that was taken back to England from his voyage may have spurred the whaling industry in that area.

Three months after returning home, Hudson was ready to sail again, this time looking for a northeast passage. He was employed by the Muscovy Company again. He left in April, with a crew of 14. He managed to get as far as Novaya Zemlya, an island north of Russia, but the route was once again blocked by ice. Disappointed, he returned to England in August.

One interesting thing was that Hudson was the first sailor to observe that ocean water changes color when it is near ice.

In April, 1609, Henry Hudson sailed for the Dutch East India Company to once again try to find a passage through the north to Asia. When bad weather forced them to turn back, Hudson, against orders from the Dutch East India Company, sailed west in search of the rumored northwest passage. They traveled down the coast of Canada and came across a large river. They traveled the river (which became the Hudson River) for about 150 miles, to what is now Albany, New York, before deciding that it would not lead all the way to the Pacific and turning back.

On his return, the English authorities ordered Hudson to make no further voyages on behalf of other countries. His journey in 1610 was funded by the British East India Company and Muscovy.

Life on the Sea

Life on the sea during Hudson’s time was primitive, with terrible living conditions. Navigation was hard, with only a compass, an astrolabe, and a quadrant. The astrolabe helped you navigate from the North Star. The quadrant helped you determine your latitude. The chronometer had not been invented yet, so you never knew your exact longitude, and you only had an hourglass to keep time.

Many sailors were very superstitious, and some, even Hudson, actually believed in mermaids.