What Happened to Amelia Earhart? Behind Her Last Flight

In a time when women could get lost in the crowd, Amelia Earhart stood out through her unique style and adventurous spirit. Get the details about what happened to Amelia Earhart. Find out the theories about Earhart’s mysterious last flight. 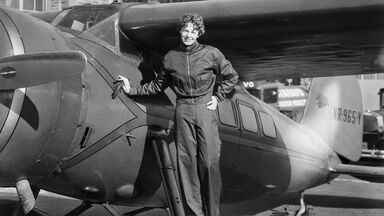 Amelia Earhart next to aircraft
Advertisement

Born in 1897, Amelia Earhart made waves in the United States by being the first woman pilot to attempt to fly around the world. However, she never truly realized that goal when her plane went missing before reaching Howland Island. The mystery surrounding Amelia Earhart’s last flight has yet to be discovered. However, the details of her final departure are clear. Learn what happened to Amelia Earhart.

In 1937, Amelia Earhart was attempting to fly around the world. On July 2, 1937, her flight in the twin-engine Lockheed Electra was part of the last leg of her historic journey. However, after taking off from Lae, New Guinea, on the morning of July 2nd, Amelia and her navigator, Fred Noonan, were never seen again.

During the flight, it’s noted that Amelia and Fred encountered several difficulties. First of all, they underestimated the fuel needed for the flight. The overcast conditions also made it challenging to ensure that Amelia maintained the proper elevation to maximize her fuel consumption. Additionally, radio communications were hard to understand, and Earhart didn’t know morse code. When Earhart made her final check-in about 19 hours into the trip, her exact location was unclear.

When Earhart never arrived in Howland Island at her expected time and didn’t answer radio contact, a massive search and rescue mission was assembled for her. The U.S. Navy and Coast Guard combed miles of ocean. After 18 months of searching, Earhart and Noonan were declared dead in January 1939. Officially, the Navy concluded that Earhart ran out of fuel and crashed.

While the Navy might have declared Earhart dead, the controversy surrounding her disappearance rages on. Current exploration into what happened during her final flight works to shed light on what truly happened to Earhart and Noonan. Beyond the official conclusion of the Navy, two theories have taken shape.

One theory into the crash of Amelia Earhart is that the Japanese took her prisoner. A recent documentary into Earhart’s death uncovered a photo showing a person similar to Earhart taken into custody by the Japanese. In this theory, the plane was blown off course to the Marshall Islands and crashed. Earhart and Noonan were taken in by the Japanese government after the aircraft crashed. It’s believed Earhart and Noonan died in Japanese custody. Additionally, islanders are noted as seeing the “lady pilot.”

A competing theory about Earhart is she was deserted on Nikumaroro Island and died. Bones found on Nikumaroro Island are speculated to belong to Earhart. While initially these bones were thought to belong to a man, recent research shows that there is a high likelihood the bones could have been Earhart's, according to D.W. Hoodless. Additionally, given the line that Earhart was flying, making her way to this island wouldn’t have been out of the realm of possibilities. The coast guard also noted signs of inhabitants even though they didn’t see Earhart or her plane.

While many theories are proposed about Earhart’s death, none have definitive proof. Therefore, what happened during the last flight of Earhart and Noonan is shrouded in mystery. So, most believe the theory proposed by the U.S. Navy that Earhart ran out of fuel and crashed into the Pacific.

Amelia Earhart crushed societal norms by becoming one of the first female pilots to fly around the world. Her love of short hair and wearing pants made her stand out among the crowd. Learn more about notable figures in history by looking at why JFK was assassinated.