Ada Byron has been called the first computer programmer. She understood how the early computer worked and even designed a new way for it to work. Learn more about what contribution Ada Byron made to computing. 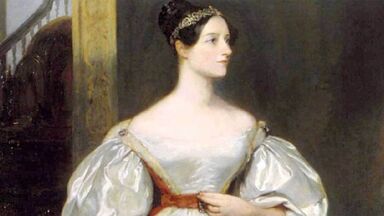 Who Was Ada Byron?

Ada Byron, or Augusta Ada Byron, was born on December 10th, 1815, to the poet Lord Byron and Anne Isabella (Annabella). In 1816, when Ada was one month old, Annabella took Ada to her parents' home, leaving her husband. Ada did not have a relationship with her father after the separation. He soon left England and died in 1824 when she was eight. Ada Byron later married William King and became the Countess of Lovelace, so she is also known as Ada Lovelace. When her computer programming notes were published, she used the initials A.A.L. for Augusta Ada Lovelace.

Ada was taught mathematics and science from a young age. Her tutors, including Professor Augustus De Morgan, hinted at her skill in mathematics. Ada Byron met Charles Babbage when she was 17, and he became her mentor. Charles was so impressed with Ada’s intellect and writing skills that he often called her “The Enchantress of Numbers.” Learn more about Ada Lovelace's contributions to computing.

What Contribution Did Ada Byron Make to Computing?

Ada Byron's contribution to computing was through her algorithms for a working computer language. The concept for computers was invented by Charles Babbage, with whom Ada worked. Ada Byron was a writer and mathematician known for her work on Babbage's early mechanical general-purpose computer. She helped to write the first algorithm intended to be processed by a machine. Get a break down of Ada Bryon’s contributions to the world of computing.

In a nine-month period from 1842-1843, Ada Byron translated an Italian mathematician’s (Luigi Menabreas) journal for Babbage's computer. As she was translating, she compiled a set of notes for herself. In her notes, she compiled a method for calculating a sequence of Bernoulli numbers with the engine. Experts suggest Ada's program would have run correctly on it if the Analytical Engine had ever been built.

In her notes, which ended up being three times longer than the actual journal translation, Ada theorized ways to create computer operations in specific groups that could be repeated, called looping. This is a computer language algorithm used to this day.

In 1843, Ada Lovelace’s notes on the computer program and her algorithms were published in an English science journal. While Ada Lovelace being the first computer programmer is controversial due to correspondence misdating by some current STEM professionals, in his time, Babbage defended Ada's contribution and wrote the following on the subject:

“We discussed together the various illustrations that might be introduced: I suggested several, but the selection was entirely her own. So also was the algebraic working out of the different problems, except, indeed, that relating to the numbers of Bernoulli, which I had offered to do to save Lady Lovelace the trouble. This she sent back to me for an amendment, having detected a grave mistake which I had made in the process.”

Though Ada Lovelace died at the young age of 36 in 1852, she has since become an impressive figure for STEM women. Due to her early contributions to programming, Ada Lovelace has been given several posthumous honors. Just a few of the recognitions for Ada Lovelace include: