What are Some Facts About Rihanna?

Rihanna is a popular singer and songwriter. She is best known for her hit songs and her carefully crafted personal style. 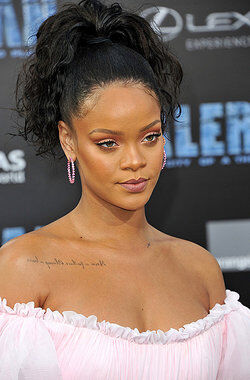 Rihanna was born Robyn Rihanna Fenty on February 20, 1988 in Saint Michael, Barbados. Rihanna is biracial: Her father is of Irish and Afro-Barbadian descent while her mother is of Afro-Guyanese descent. Rihanna’s childhood was made difficult by her father's drug addiction and she suffered debilitating headaches from the stress, but she began to recover when her parents divorced when she was 14.

Rihanna first began singing with high school classmates. She made a big impression on American record producer Evan Rogers when they were introduced to him in 2003. He had her record a solo demo. When he brought it back to the United States, it impressed rappers Chris Brown and Jay-Z. Jay-Z signed her to his Def Jam record company.

In May 2005 Rihanna released her first single, "Pon de Replay," which became a hit on the dance club scene. Her first number 1 single was 2006’s “SOS.” Her second studio album, A Girl Like Me, released in April 2006, went platinum. From there her career took off – 2007’s “Umbrella” was a huge summer hit around the world – and she became a fixture in the dance and pop music scene. Her hit albums include the following:

Rihanna has received many awards for her work, including eight Grammy Awards and MTV's Michael Jackson Video Vanguard Award. She is also listed in the Guinness World Records six times, including for being the first female artist to have UK No. 1 singles five years in a row (2007-11).

Rihanna's romantic involvements have always been in the news. She had to cancel a performance at the Grammy Awards in 2009 because her then-boyfriend and fellow musician Chris Brown assaulted her. She has also dated other musicians and athletes, including Drake and Matt Kemp.

Rihanna is a major style icon who works in the fashion industry. She has collaborated with Armani, Dior and Manolo Blahnik to bring her designs to the public.

Rihanna professes a strong Christian faith and has given back to the community through numerous charities. Notably, she founded the Clara Lionel Foundation (CLF) in 2012 to donate to fund health initiatives, including a cancer center at a hospital in Barbados. She also set up a scholarship to help Caribbean students study in the US. She received Harvard University’s 2017 Humanitarian of the Year Award for this work.