30+ President Facts From Essential to Unusual

Since 1776, the United States has had over 45 presidents. You may know some interesting facts about our most prominent presidents, such as George Washington and Abraham Lincoln, but how much do you know about the others? Keep reading to learn new president facts that range from essential to unusual. 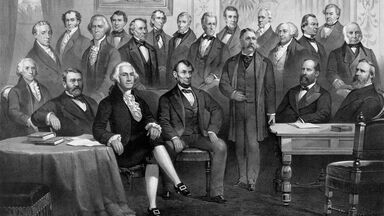 Presidents of the United States seated together
Advertisement

There's a lot to know about the people who have led America in the 18th, 19th, 20th, and 21st centuries! Check out these fun facts about presidents in United States history.

Eight Presidents Have Died in Office

Long before the 25th Amendment determined the transition of power between presidents and vice presidents, several presidents passed away while serving in office.

The smallest and shortest president was James Madison who weighed 100 pounds and was five feet four inches tall. The largest was William Howard Taft, who weighed over 330 pounds. After he became stuck in the bathtub, Taft had a larger bathtub installed in the White House that was big enough for four average-sized men. The tallest president was Abraham Lincoln at six feet five inches.

Many Presidents Have Been From Virginia

More presidents, eight in all, have been from Virginia than any other state. These presidents include George Washington, Thomas Jefferson, James Madison, James Monroe, William Henry Harrison, Zachary Taylor, John Tyler, and Woodrow Wilson. However, Virginia hasn't been the birthplace of a president in over 100 years.

John Adams served as the 2nd president of the United States before his son, John Quincy Adams, followed him to become the 6th president. Benjamin Harrison, the 23rd president, was the grandson of William Henry Harrison, the 9th president. Theodore Roosevelt was a fifth cousin to later president Franklin D. Roosevelt, and uncle to future first lady Eleanor Roosevelt. George Walker Bush followed his father, George Herbert Walker Bush, when he became president in 2000.

Two families that nearly joined these patterns were the Kennedys (John F. Kennedy's brother Robert Kennedy was assassinated when running for office in 1968) and the Clintons (Bill Clinton's wife Hillary Clinton lost the 2016 election to Donald Trump).

William Taft Served as Chief Justice and as President

Many presidents enjoy a life of retirement after their term is up, but not William Taft. He fulfilled his lifelong dream to become Chief Justice of the Supreme Court in 1921, eight years after leaving the White House. He is the only person in American history to have served in both offices.

Historians Believe That John Quincy Adams Was the Smartest President

A 2006 study applied a statistical algorithm to the works, biographies, policies, speeches, and other sources of every American president. The results showed that John Quincy Adams had the highest "intellectual brilliance" with an estimated IQ of 165-175. The next highest score was Thomas Jefferson, followed by John F. Kennedy, Bill Clinton, and Woodrow Wilson.

Two Elections Were Decided by Congress

The closest election in American history was in 1824 between Andrew Jackson, John Quincy Adams, William Crawford, and Henry Clay. Because none of the candidates received the 131 electoral votes necessary to win, the decision went to the House of Representatives, who elected John Quincy Adams in a contingent election. The 1824 election was the second election decided by Congress; the first was the presidential election of 1800 in which Thomas Jefferson and Aaron Burr tied in the Electoral College.

Grover Cleveland was both the 22nd and 24th president of the United States. He was defeated for a second term in 1888, but ran again in 1892 and won the election. Cleveland is the only president who has served two non-consecutive terms.

One President Was Elected Four Times

Franklin D. Roosevelt won four elections: 1932, 1936, 1940, and 1944. He died of a stroke in April 1945, just a few months into his final term, leaving Vice President Harry Truman to oversee the end of World War II. In 1947, Congress passed the 22nd Amendment, which limited future presidents' terms to a maximum of two.

There Has Been Only One Unanimous Electoral Victory

George Washington was the only president elected who received all the electoral votes in both his 1788 and 1792 elections. James Monroe received all but one in 1820 when a delegate from New Hampshire held out so that Washington would retain the honor of a unanimous win. The next biggest landslide was in 1936, when Franklin D. Roosevelt won all but eight electoral votes (531 to 523).

The U.S. Had An Unelected President For Two Years

Three Presidents Have Been Impeached, But Not Convicted

The Constitution allows Congress to impeach civic officials and remove them from office if convicted. Three presidents have been impeached by the House for various allegations of misconduct: Andrew Johnson in 1868, Bill Clinton in 1998 and Donald Trump in 2020 and 2021. All of these presidents were acquitted by the Senate, however, so they were not removed from office.

We all know that George Washington was the first president of the United States, but there were more firsts among the presidency in the years since. Read through these famous firsts and milestones of U.S. presidents.

The first U.S. citizen to become president was Martin Van Buren. While every president was born in North America, Van Buren was born in 1782, making him the first president to be born after the signing of the Declaration of Independence and the creation of the United States of America.

First President to Use a Telephone

First President to Be Married in the White House

Benjamin Harrison became the first president to attend a baseball game when he went to the Cincinnati/Washington major league game in 1892. The relationship between the presidency and baseball continues to this day, as nearly every president starting with William Taft has thrown out the first pitch for the Washington team's season.

When Henry Ford's Model T came onto the market, President William Taft was eager to have one for the White House. In 1909 the automobile became the official means of transport for the president.

The first president to travel out of the country while in office was Theodore Roosevelt on a 1906 trip to inspect the Panama Canal. His successor, William Howard Taft, followed suit in 1909 for the same purpose.

First President to Appear on Television

Prior to 1939, presidents had used newspapers and radio to get their message across. But when Franklin D. Roosevelt appeared in a broadcast from the 1939 World's Fair, it opened up the possibilities of transmitting presidential messages to a much wider audience.

First President to Fly in an Airplane

While Franklin D. Roosevelt made many international trips via ship, he made history as the first president to fly in an airplane in 1943. He crossed the Atlantic Ocean on a trip to North Africa. The trip was a secret mission due to its location in wartorn Casablanca during World War II. Learn more about presidential airplane trips by exploring facts about Air Force One.

First Woman to Run for President

The first woman to run for the office of U.S. president was Victoria Woodhull in 1872. She ran as the candidate from the Equal Rights Party with running mate Frederick Douglass, and lost to Ulysses S. Grant. Several women followed Woodhull's lead as candidates from various parties, including Margaret Chase Smith, Shirley Chisholm and Ellen McCormack. In 2016, Hillary Clinton became the first female candidate nominated by a major party, and Kamala Harris became the first female vice president when she and Joe Biden won the 2020 presidential election.

The history of the United States presidents contains some odd trivia as well. Take a look at these coincidences and weird facts about presidents that are distinctive to some presidents and shared among others.

The 3rd president hated public speaking and was known to avoid speaking in front of people, even during his time in the Continental Congress. Thomas Jefferson's two presidential speeches were his Inaugural Addresses, and he submitted his State of the Union messages to Congress in writing rather than speaking to them.

Many presidents have valued physical fitness, but John Quincy Adams was possibly the most enthusiastic in how far he went for it. President Adams was known to swim naked in the Potomac River before getting to the business of the nation, leading to some awkward encounters with journalists as they waited for an interview.

James Buchanan Was a Lifelong Bachelor

While many presidents weren't married when they became president (four were widowed before taking office, and three were married while they were in office), James Buchanan was the only president who never married at all. His niece, Harriet Rebecca Lane Johnson, served as his First Lady. Buchanan was rumored to have several relationships with other men, including Alabama Senator William Rufus King, who was Franklin Pierce's vice president.

Almost Every President Has Had a Pet

Humans haven't been the only occupants of the White House. Every president except James K. Polk and Donald Trump have had a pet of some kind while in the office. These pets are typically dogs and horses, with some exceptions being parrots (one who outlived his owner, James Madison, and the other who was taught profanity by Andrew Jackson), tiger cubs (before Congress forced Martin Van Buren to take them to a zoo), a turkey (saved from Thanksgiving dinner by Abraham Lincoln), and a few alligators (owned by both John Quincy Adams and Benjamin Harrison).

July 4th is a Coincidental Date

Three Founding Fathers who later served as presidents died on July 4th: John Adams and Thomas Jefferson in 1826, five hours apart, and James Monroe in 1831. The day is especially coincidental when one considers the part each of these men played in establishing July 4th as Independence Day. Later president Calvin Coolidge was born on that day.

Harrison Had the Longest Inaugural Speech and the Shortest Term

Abraham Lincoln Was an Accomplished Wrestler

Both historians and Lincoln himself consider the Emancipation Proclamation to be his most significant achievement in office. However, the 16th presidents' long limbs and height enabled him to be quite an accomplished wrestler in his youth. He was defeated only once in 300 matches and even won his county's wrestling championship when he was 21.

Andrew Jackson Killed Someone in a Duel

The most famous gun duel in American History was between former Treasury Secretary Alexander Hamilton and Vice President Aaron Burr in 1804, in which Burr killed Hamilton. But that wasn't the only duel associated with the presidency. In 1806, two years after Hamilton was killed, future president Andrew Jackson dueled Charles Dickinson after Dickinson accused him of cheating on a bet and insulting his wife. It was possibly dozens or even hundreds of duels into Jackson's lifetime before he became president 23 years later.

The Incredible History of American Presidents

The men and women who have led America into the 21st century were notable individuals. Learning more about them helps us learn about the values and attributes of the American people themselves. For more interesting historical trivia, find out which president was in office when the White House was set on fire (twice).