What Tragedy Happened to St. Patrick as a Teenager?

Very little is actually known about the life of St. Patrick, the patron saint of Ireland. We know he was credited with bringing Christianity to Ireland. And the story that most people know about St Patrick is that he drove out all of the snakes on the island of Ireland through the power of prayer.

However, many people don’t realize that St. Patrick was neither named Patrick at his birth nor was he born in Ireland. So what tragedy happened to St. Patrick as a teenager that brought him to Ireland? He was kidnapped. 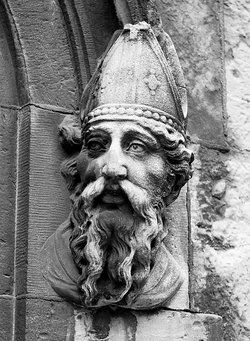 St. Patrick was actually born in Britain at the end of the fourth century, though the exact date and location of his birth have been disputed. He was born into Roman nobility and may have been named Magonus Succetus, or Maewyn Succat. (Patricius is the name he chose when he became a priest.)

When he was 16, he was taken by a group of Irish raiders and brought to Ireland to be sold off as a laboring slave. He spent the next six years working as a sheep herder until he managed to escape.

During his time in slavery, Patrick had turned to his faith to help him through this difficult time. When he escaped he claimed that God had spoken to him and told him it was time to go home.

After finding a ship to take him home, Patrick was not yet safe. The story goes that the boat he was on landed off course in a barren area. Patrick and the sailors almost died of starvation until Patrick prayed for food and a pack of wild pigs appeared.

After he escaped captivity and returned to Britain, Patrick decided to pursue his faith further and then return to Ireland as a missionary. This was, in part, due to a dream he had about Irish voices beseeching him to come back.

Patrick may not have been the first Christian missionary to Ireland but he seems to have been the most successful. He tirelessly traveled far and wide across the country making conversions. It was said he would pursue converts from paganism by using the three-leafed clover as a way of explaining the Christian Holy Trinity (Father, Son, and Holy Ghost).

Somehow the work of St. Patrick became legendary, and stories were clearly exaggerated. We already know that it was claimed he rid Ireland of snakes and that pigs miraculously appeared when he prayed for food. It was also claimed that he brought people back from the dead.

St. Patrick's death has been recorded as 493 AD, which would have made him around 120 years old when he died, another miraculous feat. However, the date of his death is as disputed as the date of his birth.

Whether the legends are true or not, St. Patrick's tragic life as a teenager evolved into a positive, fruitful life which you can celebrate annually on March 17, St. Patrick's Day.