What Are Some Facts About Christopher Columbus?

Christopher Columbus (1451 - 1506) was a 15th century Italian explorer who completed four voyages across the Atlantic Ocean, starting the Spanish colonization of several places in the New World. The history about him is incomplete, and often controversial, resulting in different opinions about Columbus' accomplishments. 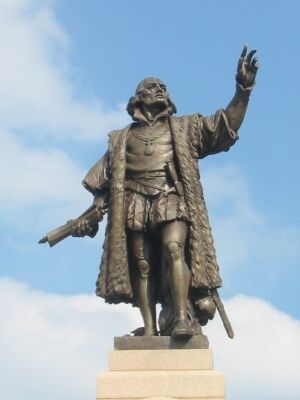 Christopher Columbus was born in October 1451 in Genoa, Italy.

He went by Cristóbal Colón after he moved to Spain in 1485.

His parents' names were Domenico Colombo, a wool weaver, and Susanna Fontanarossa.

He had three brothers - Bartolomeo, Giovanni Pellegrino and Giacomo - and a sister named Bianchinetta.

His family was not wealthy; so, he did not receive the education of the wealthy.

He supported himself by selling maps and charts early on in his life.

He was only 14 years old when he began working on ships.

Since Christopher Columbus was born in the port city of Genoa, it is not surprising that he became a navigator. Although he was largely self-taught through reading, he attended Prince Henry's School of Navigation in Portugal.

In 1479 he married Felipa Perestrello e Monis, the daughter of a wealthy Portuguese family.

They had one child together: a boy named Diego. His wife died of consumption only six years after they were married.

In 1487 he took a mistress in Spain named Beatriz Enriquez de Arana. She was a 20-year old orphan. She and Columbus had a son, but never married.

In 1470, at the age of 19, he played a prominent role on a Genoese sailing ship that had the goal of conquering Naples.

In 1474, at the age of 23, he was hired as a sailor on a ship going to the island of Khíos in the Aegean Sea. He spent a year on the island and came back to Italy financially independent. After that, he received a lot of experience navigating the Atlantic Ocean sailing out of Lisbon, Portugal.

Columbus Goes to the Americas

His claim to fame is a series of voyages that made Europeans aware of the Americas, which led to colonization. Bartholomew, his brother the map maker, inspired him to make the famous voyage to the Americas by sailing west across the Atlantic instead of the more traditional land route to Asia.

All four of the voyages of Christopher Columbus were across the Atlantic Ocean to Central and South America and the islands of the Caribbean.

The voyages were funded by the Catholic King and Queen of Spain who wanted to colonize the New World and establish profitable trade routes to Asia.

Voyage #1 - Columbus and the Passage to the West

King John II of Portugal refused a request from Columbus to support his journey westward, feeling that the distance involved had been underestimated by Columbus.

After two years of negotiations, Ferdinand II of Aragon and Isabella I of Castile (both were kingdoms of Spain) agreed to provide half of the financing Columbus needed to search for a route to the East, even though they also felt that he had underestimated the distance. He had already gotten half of what he needed from private Italian investors.

Columbus had miscalculated the distance for the new western passage. He thought that only 2,300 miles separated the Canary Islands from Japan, which would allow for sufficient provisions to be carried on the ship. The actual distance is closer to 12,000 miles.

Part of the bargain he struck with the Spanish court was:

Getting a crew together was very difficult, since people thought that the Earth was flat and they were sure they would sail off of the end of the world.

He left from Spain with three ships, the Pinta, Nina, and Santa Maria. Columbus and about 40 men manned the Santa Maria, with between 20 and 30 men on each of the other two ships.

One the day Columbus set sail he wrote in his diary

I should not proceed by land to the East, as is customary, but by a Westerly route, in which direction we have hitherto no certain evidence that any one has gone.

They did not take soldiers, priests, or settlers because this was primarily a voyage of exploration.

Columbus took enough provisions for a year including:

Things to trade including:

After seven days he had sailed to the Canary Islands and stopped for provisions and repairs. On September 6th he set out for the Indies.

At 2 o’clock on the morning of October 12, 1492 a lookout on the Pinta named Rodrigo de Triana shouted, “Tierra, Tierra” which translates as “Land, Land.” The trip had taken 36 days and the weary crew stepped foot on a new land. Soon, the natives that lived there greeted Columbus and his crew.

It is not certain which island Columbus landed on in the Bahamas, but most think it was San Salvador or Samana Cay. The natives were eager to trade and the Spaniards, thinking they had found the Indies, called the natives Indians.

He also explored some of Cuba, Haiti, and the Dominican Republic.

On Christmas Day 1492, the Santa Maria ran aground and was abandoned. Columbus went back to Spain on January 15, 1493, leaving 39 men in the settlement he founded which he called La Navidad.

When he got back to Spain, he gave Ferdinand and Isabella some gold nuggets and jewelry and told them he thought he had found islands that were close to Japan or China.

Columbus set out later that same year, 1493, with instructions from the King and Queen to establish friendly relations with the native people.

He arrived at Dominica on November 3, 1493 and after exploring for a while, went on to the Greater Antilles, landing in Puerto Rico.

On November 22, Columbus traveled to La Navidad to find that his men, who he had left their eleven months before, had been killed. He established a new settlement on the coast of Hispaniola called Isabella.

In 1495, Columbus enslaved 560 people against the wishes of the King and Queen. He shipped them to Spain. Around 200 died on the trip and half of the rest were ill. They arrived in Spain in 1496. This was the beginning of slavery for the Spanish in the New World.

Christopher Columbus believed his voyages were taking him to China but where they took him was not even close.

He returned to Hispaniola in 1500 to find the settlers there were not happy because they felt he lied to them about the abundance of riches.

Columbus had been appointed Viceroy and Governor of the Indies but he was not able to handle the post, partly because of bad health. He asked for help in governing and Bobadilla was appointed.

Because of complaints, Bobadilla arrested Columbus in 1500 and soon sent him back to Spain. He was jailed for six weeks before he was released.

Columbus landed in Martinique on June 15, 1502 but soon continued on because a hurricane was coming. He was denied port at Santo Domingo and went on to the mouth of the Jaina River.

Soon he explored the islands off the coast of Honduras and later, went on to Honduras, Costa Rica, Nicaragua, and Panama.

He and his men became stranded in Jamaica and stayed there a year because the governor of Hispaniola would not help him. Columbus and his men then returned to Spain on November 7, 1504.

Christopher Columbus went to the Americas and back to Spain four times between 1492 and 1504. These trips marked the beginning of exploration and colonization of the American continents by the people of Europe.

During all four voyages, Christopher Columbus continued to believe that the islands of the Caribbean were part of the Asian continent. He believed that it was only a matter of time before he found the passage to Asia. It is possible that because he refused to accept that these lands were not part of Asia, that they were named for Amerigo Vespucci and not him.

There is a controversy about the value of Christopher Columbus' discovery of the Americas. Some people contest that he destroyed what was already happening in America at the time, while others will say that he brought new life and prosperity to the land.

The controversy hinges over these factors:

They made it to northeastern Canada and spent the winter there before returning home. They discovered North America, but their discovery did not lead to colonization like Columbus’ discovery did. Columbus went down in history and didn’t even do what he had intended to do.

Those who see Columbus as a hero believe that:

Facts, Opinions and Recognition for Columbus

Columbus died in Spain at the age of 55 of Reiter's Syndrome.