What Is the Political Legacy of Ted Kennedy?

Ted Kennedy, brother to President John F. Kennedy and Senator Robert F. Kennedy, was a Democratic Senator from Massachusetts for nearly 50 years. His career began in 1962 and he was re-elected a total of seven times. Firmly liberal in his beliefs, he was a well-known and influential Senator who had a strong impact on American politics. 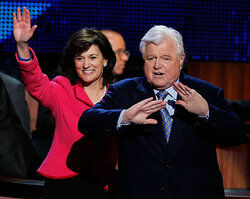 There are many answers when considering the political legacy of Ted Kennedy. During Kennedy’s Senate career, he championed numerous causes important to the public, from cancer research to AIDS care, from immigration to health benefits.

His primary influence on American politics was simply the fact that he got things done; he was known, and remains known, as a lawmaker.

Kennedy wasn’t always liked – particularly by Republicans, which has to be considered as part of the political legacy of Ted Kennedy. Of course, this is to be expected when a political figure is unabashedly open about his belief system, and when his belief system leans hard in one political direction.

Whether liked or not, he was certainly recognizable and memorable, and however opposing parties felt about him, he still managed to work in bipartisan situations extremely well. In fact, even while being considered a Democratic icon during his years of service, he was also recognized (even by those on the opposing side) for being extremely diplomatic and dealing respectfully and successfully with those who didn’t share his belief system. This, too, is an important part of Ted Kennedy's political legacy.

Kennedy nonetheless remained so firmly entrenched in his own liberal belief system that he was also known for causing something of a sense of division between the political parties; it wasn’t his fault, but in the way of American politics, he was so universally known for his Democratic beliefs that he was often considered a figurehead of the party. This put him in a position to be often-attacked and used as a negative example by those opposing him, whether in Senate votes or political elections.