Where Is Michael Jackson's Birth Home?

The famous pop star Michael Jackson was born in Gary, Indiana, a suburb of Chicago, Illinois, in August of 1958. 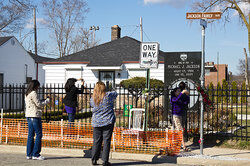 More Facts About the Jackson Family

As Jackson grew older and his career moved forward, he left his home in Indiana, as did his brothers and sisters.