Mother to Mary Queen of Scots, Mary of Guise (or Marie de Guise) is an often overlooked but important part of Scotland's history. Working against fierce opposition to her gender and nationality, this regent ruled when women were not often seen in positions of power. Widowed twice, and living through the deaths of four children, she overcame much tragedy in her life. 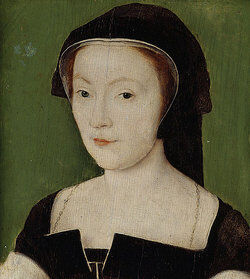 Mary of Guise was born on November 22, 1515 in France. She was the oldest of twelve children of Claude of Lorraine, Duke of Guise and Antoinette of Bourbon. At age eleven, she was sent to live with her grandmother in order to receive a religious upbringing. During this time, she was exposed to a simple life where cooking, cleaning and tending to the garden were part of her daily routine. Mary's uncle, the Duke of Lorraine, was impressed with her qualities and, not wishing her to waste away in a religious life, brought her to the royal court in 1530. At this time, she was taught etiquette and was being groomed to marry into royalty.

When Mary of Guise was eighteen, she married Louis II of Orleans, Duke of Longueville. This marriage was arranged but proved to be happy. Mary and Louis had two sons: Francis and Louis. Mary's husband Louis died in 1537 of smallpox. This made her a widow at the age of twenty-one.

James V, King of Scots, lost his wife, and Mary's friend, Madeleine of Valois around the time of the death of Mary's husband Louis. He was looking to marry into French royalty again to maintain his alliance with France, and sought her hand in marriage. Mary did not want to marry again so quickly or leave France, but she was given no choice in the matter. James and Mary were married by proxy in May 1538. Mary had to leave her son Francis (Louis had died in infancy) in France and moved to Scotland in June where the marriage was confirmed.

James and Mary had two sons: James born in May 1540 and Robert in April 1541, but tragically both sons died hours apart in April 1541. This was devastating to James and Mary. Mary was expected to conceive again quickly. She was not given time to grieve. Mary and James had a daughter, Mary, on December 8, 1542. This was just six days before James V died. His death made baby Mary next in line for the crown.

After James' death, Mary of Guise believed she would be made regent, but the role was given to James Hamilton, Earl of Arran. Arran was a supporter of Protestant England. He made an agreement for young Mary to marry England's Prince Edward when she reached age 10, which Mary of Guise rejected. Henry VIII of England embarked on a series of savage attacks on Scotland, often referred to as the rough wooing, designed to force the Scots to allow the marriage. In response, in 1548 Mary of Guise arranged for young Queen Mary to travel to France and be groomed to marry the Dauphin Francois, strengthening ties with France further. The French, in return, provided military support to the Scots.

It wasn't until April 12, 1554, after several years of unrest with England, that Mary of Guise was finally able to wrestle control from Lord Arran and be named Queen Regent of Scotland. During her time as Regent of Scotland, Mary of Guise faced constant conflict. Her goal was to modernize Scotland while keeping it Catholic and free from English interference, but there were many Scottish supporters of England and the Protestant movement who resisted her efforts.

Protestant reform was strong at the time. One such reformer was John Knox, who preached against Mary's regency and wanted to overthrow her to establish the Protestant church in Scotland. Led by a group of nobles called the Lords of the Congregation, the pro-England supporters continued to rebel against Mary of Guise. They were suspicious of her continued ties with Catholic France, made stronger by her daughter's marriage to Francois in 1558.

The Protestants continued to gain strength and led revolts against Mary of Guise. Mary faced the Protestant Lords of the Congregation at Perth on May 22, 1559, but had to retreat to Edinburgh where, with the help of French troops she recaptured the city, after Knox and the Protestant reformers had called for her to be deposed.

How Did Mary of Guise Die?

By 1560 Mary of Guise's health was deteriorating—she was suffering from heart disease and dropsy— but she attempted to keep control right until the end.

An English army entered Scotland on March 29, 1560, and Mary took refuge in Edinburgh Castle. When she knew she was dying Mary sent for the lords of the Congregation. Mary begged the Lords to maintain the alliance with France and end their dealings with England. She also urged them to follow her daughter's rule. She died on June 11, 1560 at the age of 45.

A Strong and Influential Leader

Mary of Guise was an intelligent and strong political leader. She reigned during a period of conflict and unrest in Scotland. She held on to her religious beliefs and kept the country free from English rule while preserving the crown for her daughter, Mary, Queen of Scots. Instead of returning to France and her children, Mary of Guise decided to stay in Scotland to rule on her daughter's behalf. This took a lot of courage in a time when women weren't normally seen in a position of power.

Sadly, after all Mary's hard work to keep Scotland Catholic and close to France, on July 6, 1560, the French, Scots and English signed a peace treaty and the French and English troops evacuated Scotland. The treaty marked the start of the Reformation in Scotland, and the end of the alliance between Scotland and France. Her daughter would lose control of Scotland to the Protestants.