How Did Martin Luther King's Vision Change the World? 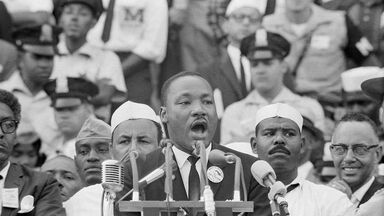 What Was Martin Luther King's Vision?

Martin Luther King, Jr. believed all men are created equal and should enjoy the same rights and privileges. One of his most poignant lines from his famous I Have a Dream speech was that he hoped his children would be judged by the content of their character, not the color of their skin.

However, the way he strove to achieve this goal was the factor that truly changed the world. Inspired by Mahatma Gandhi's policy of nonviolent protest, King infused the philosophy into the American civil rights movements. He fiercely ingrained the notion of civil disobedience into his followers’ hearts and minds, making him a worldwide leader for peace and civility.

The Philosophy of Nonviolence

Martin Luther King, Jr.'s vision and leadership stemmed from his strong belief in the power of nonviolence. It allowed civil rights protestors to avoid harsher legal charges, but it had a higher meaning than that as well. King detailed the six principles of nonviolence in his book, Stride Toward Freedom: The Montgomery Story.

"1. Nonviolence is a way of life for courageous people. It is active nonviolent
resistance to evil.

2. Nonviolence seeks to win friendship and understanding. The end result of
nonviolence is redemption and reconciliation.

4. Nonviolence holds that suffering can educate and transform. Nonviolence
willingly accepts the consequences to its acts.

6. Nonviolence believes that the universe is on the side of justice. The
nonviolent resister has deep faith that justice will eventually win."

King believed that nonviolence was an active rejection of the cruelty and tyranny of an opposing class, not just the avoidance of repercussions. This fundamental belief, borne out of the uniquely American experience of civil life after institutional slavery and racism, carried through King's influence all over the world.

A Vision That Changed the Future

It’s because of Martin Luther King, Jr. and the efforts of his supporters that America came to understand the power of nonviolent protest. When his nonviolent efforts were met with violence, it actually garnered empathy and support for his cause. The public was swayed to such a magnitude that major acts of Congressional power were set in motion.

King was largely responsible for the passage of the Civil Rights Act of 1964 and the Voting Rights Act of 1965. The Civil Rights Act banned discrimination in the workforce and public accommodations based on “race, color, religion, or national origin.” The Voting Rights Act protects African Americans’ right to vote. He also played a major part in the passage of the Fair Housing Act of 1968. This prevents people from banning Black people from any sort of housing, be it a rental or a sale.

Even until the day he was killed, King never allowed fear to triumph. He unified people together under a common goal. Today, you won’t find Black people and white people forced to sit in separate sections on a bus or drink from separate water fountains in a public space. Although prejudice remains, the tide is shifting in a way where the racists of the world are scorned, and not innocent African Americans.

Changing the World Through Nonviolence

Even though Martin Luther King, Jr. was a notable American citizen, his influence did not stop at the American borders. It has transcended not only his race and nationality but also the span of his lifetime.

Martin Luther King, Jr. also inspired the 1965 adoption of the International Convention on the Elimination of All Forms of Racial Discrimination. It was ratified nearly a year after King's assassination and ensures that members outlaw hate speech and criminalize membership in organizations determined to be racist.

Symbol of Peace, Equality and Hope Around the World

But beyond the more direct ways that King changed the world, his philosophy of nonviolence and peace has inspired many examples of civil disobedience. His face and name are synonymous with peace and equality and are an emblem for hope among the oppressed.

Segregation in America has been abolished in an official manner, although we still see discrimination in other ways. Certain inner cities continue to struggle with violence and a need for equal pay and equal opportunity. If King were alive, he’d be rallying in every city that faced inequality and injustice.

At the same time, in 2008, America elected its first Black president, President Barack Obama. That’s something King would be very proud of. King's name is still spoken with pride, and his legacy of nonviolence has proven that the race war can be settled through nonviolent protest and a common endeavor for an anti-antagonistic world.

A Legacy That Transcends a Holiday