Why Did Jane Goodall Become Famous?

Born in 1934, British researcher Jane Goodall is best known as the top expert on chimpanzees. As an anthropologist and primatologist, Goodall actually lived among the chimpanzees in Africa. She learned and documented a lot about their behavior and social structure, going to become one of their greatest advocates, working to raise awareness about captive and wild chimps. 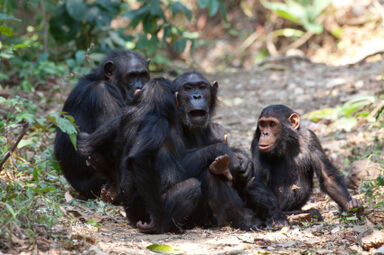 Studying chimpanzees in the wild
Advertisement

Her interest and research continued when she returned to Africa in 1960. It was then that she started on what would become her world renowned research on chimpanzees. She stayed among the Kasakela chimpanzee community in Tanzania's Gombe Stream National Park.

Since her research had fewer restrictions, she was able to observe and record information that may have otherwise been overlooked by more traditional research methods. She named chimpanzees she encountered, for instance, rather than assigning numbers. This allowed her to bond with the chimps much more personally, more readily recognizing individual personalities.

Jane Goodall devoted her life to living among the chimps, studying them in their natural environment. As such, Jane learned a great deal about chimpanzees and her contribution to the field of science is invaluable. Some of her most notable scientific contributions include the following discoveries.

This is perhaps Jane Goodall’s most famous discovery, as it was previously thought that only humans successfully forged and used tools. She observed chimps as they searched for the right twigs, removed all leaves from those twigs, and then proceeded to use saliva and the twig to pull termites from holes. This use of a tool opened extraordinary doors for further research, and has led to the findings of tool-usage among other species as well.

Chimpanzees have close, and often complex relationships with other chimps and among groups of chimps. These relationships are often marked by the sharing of food and specific grooming rituals.

Chimp mothers have strong relationships to their children, and that siblings have similarly close familial bonds. Family relationships are also marked by grooming and sharing food.

It was previously thought that chimpanzees were vegetarians. However, Jane Goodall learned that chimps hunt small animals. In some circumstances, they even hunt other chimpanzees to eat. Troops of chimps also regularly wage organized war against rival groups.

The destruction of chimpanzees’ habitats, as well as poaching, stands to seriously threaten chimp populations. Jane Goodall has worked tirelessly on conservation efforts as a result.

All of these contributions by Jane Goodall have helped people to understand not just the relationships of chimps with each other, but also the close connections between chimpanzees and humans.