Where Did Isaac Merritt Singer Go to School?

Wondering where Isaac Merritt Singer went to school is understandable, since his inventions revolutionized the way work was done. However, formal schooling and extensive education doesn't appear to have been provided to Isaac Merritt Singer, so he clearly accomplished his work and created his inventions without the benefit of an extensive education. 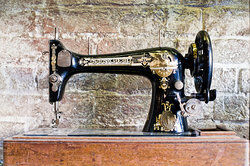 Singer and the School of Life

Isaac Merritt Singer attended the school of life. Much of his knowledge that he used for his inventions appears to have come from going to work as an apprentice in his brother’s machine shop at the age of twelve.

Coming from a large and poor immigrant family, Singer had to support himself and his family, so prior to that, he engaged in acting and other odd jobs in order to make ends meet for his mother and father. He had no formal education.

Isaac Merritt Singer is one of the men who is credited with the invention and proliferation of affordable home sewing machines that were both innovative and affordable for housewives and others to purchase, maintain, and use. He was able to invent this revolutionary product without formal education.

Family and Divorce Effects on Education

Singer was born in 1811 in Pittstown, Renssaeler County, New York, and he was one of numerous children (the full number of his brothers and sisters has been lost to history) who were affected by his father and mother divorcing when he was only ten years old.

At the age of 12, he went to live with one of his older brothers in Oswego, New York. It is likely that the number of children in the family and the divorce all contributed to the fact that he could not attend school and led him to get the job in his brother's machine shop where he learned the skills to invent his famous sewing machine.