How Did Thomas Jefferson Die?

Thomas Jefferson was the author of the Declaration of Independence and third president of the United States. He was born on April 13, 1743, at Shadwell, Virginia and died on July 4, 1826, at his home, Monticello, at the age of 83. 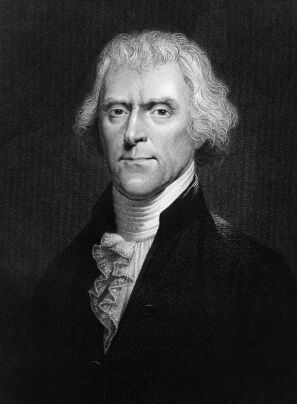 After being president, Jefferson retired to Monticello. He sold his book collection to be the base of the Library of Congress. At 76 years old, he played a major role in the founding of Virginia University. He died of unknown causes on July 4, 1826, just hours before his friend, John Adams. Since he was 83 years old, it is assumed he died of natural causes.

As a child, Jefferson was tutored by Reverend James Maury. When he was nine years old, he began to study Latin, French, and Greek. At sixteen, he attended William and Mary College, and continued his law education with George Wythe, the first professor of law in America. As a student, he witnessed Patrick Henry’s passionate stand in 1765 against the Stamp Act at the House of Burgess in Virginia.

He became a lawyer in 1769 and was elected to the House of Burgess the same year. It was there that he began his career in revolutionary politics. He married Martha Wayles Skelton in 1772, and they lived in the not quite finished Monticello. He inherited lands from his father and good social standing from his mother.

He was not a vocal member of Congress, but rather let his thoughts be known by writing. He was 33 when he drafted the Declaration of Independence. He was voted the governor of Virginia in 1779, succeeding Patrick Henry. Since the nation was still at war, he felt that Virginia would have done better with a military man. He served one term and declined re-election.

In the following years, he wrote a bill for religious freedom in Virginia, which was enacted in 1786. He was appointed ambassador to France in 1785 and resigned in 1793.

He was one of the first presidents of the United States. As president from 1801-1809, he cut the budget and military spending, eliminated the whiskey tax, and reduced the national debt. He sent the Navy to fight the Barbary pirates and acquired the Louisiana Purchase from Napoleon in 1803. He also supported the Lewis and Clark Expedition.

Many think of Jefferson as a great statesman and a patriot. The word “patriotism” comes from the Latin “patria” meaning “fatherland” or “homeland”, and Thomas Jefferson was one of the founding fathers of the United States.

“When in the course of human events” is the opening of the Declaration of Independence. In 1776, negotiations with England and King George III were at a stalemate. The main reason the Declaration of Independence was necessary was taxation without representation. The Continental Congress voted on July 2, 1776 to declare their independence from the British Empire, and Jefferson finished the text on July 4th.

All 56 signers of the Declaration of Independence were not present at that time, and they signed at a later date. Most historians agree that the document was signed by August 2nd.

The Declaration was signed at Independence Hall in Philadelphia, Pennsylvania.