How Many Times Has Joe Biden Run for President? His Political Journey

Joe Biden was inaugurated as President of the United States in January 2021 after winning the 2020 election. The 2020 election is not the first time he ran for president. The answer to the question, "How many times has Joe Biden run for president?" is three. Discover when he ran and the outcome of each attempt. 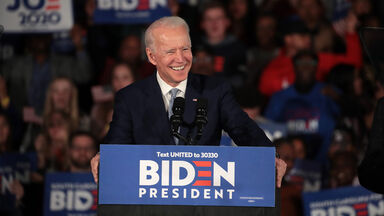 In April 2019, former Vice President Joseph R. Biden, Jr., announced that he would run for president in 2020, a campaign that he ultimately won. There were 20 candidates on the stage during the first democratic debate, which was held in June 2019. The field narrowed as the campaign moved forward. By the final debate, in March 2020, Joe Biden and Bernie Sanders were the only candidates still actively in the race.

Primary elections followed the debates. In August 2020, at the Democratic National Convention, Joe Biden was officially selected as that year's Democratic candidate for President of the United States (POTUS). Just prior to the convention, Biden selected Kamala Harris as his running mate, so the Biden-Harris ticket was formally introduced at the convention. President Joseph R. Biden, Jr. was inaugurated on January 20, 2021. Kamala Harris was sworn in as vice president on the same day.

In January 2007, then-Senator Joe Biden announced that he would enter the 2008 presidential campaign. He participated in more than a dozen democratic debates but withdrew from the election prior to the last nine debates, just after the Iowa caucuses. Illinois Senator Barack Obama won the Iowa caucuses, while Biden received less than one present of the vote.

Senator Chris Dodd withdrew around the same time as Biden. Once Biden and Dodd withdrew, the slate of remaining candidates featured Senators Hilary Clinton, John Edwards and Barack Obama, as well as William (Bill) Richardson, governor of New Mexico. The field of candidates continued to narrow, with only Senators Obama and Clinton participating in the final six debates.

Barack Obama won the nomination and, ultimately, the presidency. Obama officially became the 2008 democratic candidate for president during the August 2020 Democratic National Convention. Just prior to the convention, Obama announced that Joe Biden would be his running mate. The Obama-Biden ticket was formally announced during the convention. The pair served two terms (eight years) as president and vice president, respectively.

The presidential race that led to Joe Biden being elected vice president was not his first attempt to run for president. He also ran for president in 1988. He declared his candidacy for president for the first time in June 1987, though he only stayed in the race for a few months. He withdrew in September 1987, which is before the primary elections began. Another candidate, Pat Schroeder (a Colorado congressional representative) withdrew from the race around the same time as Biden.

Massachusetts governor Michael Dukakis ultimately won the 1988 nomination for president. He named Texas Senator Lloyd Bentsen as his running mate. The Dukakis-Bentsen ticket did not prevail in the 1988 election. Instead, former Texas governor George W. Bush was elected president. Former Secretary of Defense and White House Chief of Staff Dick Cheney was his vice-presidential running mate.

Biden's Journey to the White House

Joe Biden has had a long and storied political career, culminating with being elected POTUS in 2020. He continuously represented Delaware in the United States Senate from 1973 until he was installed as vice president in 2009. He served as vice president for eight years. He considered running for president in 2016 but ultimately decided not to pursue office that year. He remained out of politics for a few years before deciding to run in 2020. His inauguration as president in 2021 represented a long political journey that continues still.

What May the Future Hold?

Time will tell what President Joseph R. Biden, Jr. will accomplish as president or if he will seek re-election in 2024. Through at least then, the answer to the question of how many times has Joe Biden run for president will remain three. Now that you know more about the Biden presidential runs and his political journey, explore the path that led Vice President Kamala Harris to become the first woman, first Black person and first Asian-American to hold that office. From there, take the time to learn more about how America's government works. Start by exploring the checks and balances in the United States Constitution.