How Did Pancho Villa Die?

If you are interested in Mexican history, you may have wondered how Pancho Villa died. The significance that Pancho Villa had on society adds more depth to his death, and makes one realize that his loss was both unfortunate and untimely. 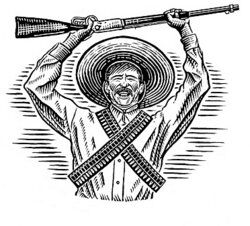 Although his later years were not very famed, he was given a hacienda by the government when the revolution ended in 1920.

Villa was taking a fairly standard visit to Parral on July 20, 1923. However, he usually went accompanied by a number of bodyguards, and this time he went with only four associates. On his drive home, in a 1919 Dodge roadster that can be viewed at the Historical Museum of the Mexican Revolution, someone shouted out "Viva Villa!" After that, seven riflemen appeared and fired more than forty bullets into the car. Nine bullets hit Villa; four went into his head. He died immediately. His body was found with his hand reaching for his gun.

Three of the men in the car with him died. Ramon Contreras, who killed one of the murderers, escaped. He reported that Villa's last words were "Don't let it end like this. Tell them, I said something."

Villa was buried in the city cemetery located in Parral, Chihuahua after he died at the rather young age of 45 years old. There are tombs for him both there and in Mexico City. Three years later, in 1926, his skull was stolen from his grave. Unfortunately, those who opposed him could not even let him rest in peace.

The story of how Pancho Villa died is disturbing. It is almost as if that band of seven knew he was going to be without a massive group of body guards that day. Maybe it's a conspiracy theory; maybe it's not. Jesus Salas Barraza, a legislator of Durango, claimed sole responsibility for the murder. Eventally, Felix Larra was found to be guilty. However, clearly, others were involved to one degree or another since seven people fired the shots at him.

Whether or not one considers Villa a rebel or a hero, he certainly made a lot of contributions to the Mexican revolution and society. Although his reign of power had ended by the time of his murder, he was only 45 years old at the time of his death. Who knows what other plans he had for his beloved country?

Who Was Pancho Villa?

On June 5, 1878, Pancho Villa was born Jose Doroteo Arango Arambula. He also went by the nickname Francisco Villa. The reason that he is so well known is because he was a very prominent general in the Mexican Revolution. Before his rise to fame though, he had a rather tainted childhood and early life. According to legend, Villa shot Lopez Negre after he attempted to rape one of his sisters. The word "legend" is used to denote the fact that some scholars believe that this tale is of ambiguous veracity.

Throughout the years he had various run ins with the law, and he belonged to a group of robbers led by one of the most notorious bandits, Ignacio Parra. He continued on his pathway of robbery until around 1910.

Francisco Madero, a Mexican revolutionary, was also a military commander, and one of his men, Pascual Orozco, started a rebellion against him. At this point, Villa became involved in the fighting because he went with troops and General Victoriano Huerta to fight in honor of Madero. During the fighting, Huerta accused Villa of stealing a horse and not listening to him. Villa was sentenced to be executed; however, President Madero sent a letter saving him from the dreadful date at the very last minute.

Madero was president of Mexico for awhile; however, Huerta gained power once he died, and attempted to become a dictator of Mexico. Villa joined in the revolt against Huerta, at which point Pancho became very well known for his contributions and successes. He recruited able soldiers to his cause, such as Manuel Chao, Sam Dreben, and Ivor Thord Gray.

He eventually became governor of the state of Chihuahua, and raised money for southern Mexico by printing his own type of money. This money was ordered to be considered equivalent to the Mexican pesos. He took some of the land from the rich, and gave it to widows and families of revolutionaries who had died. He seemed to be a modern day Robin Hood.

Villa continued to have a great deal of power and influence in Mexico until 1916. At this point, he had been defeated at a battle in Columbus, and he was no longer though very highly of by the rest of the governing body.