How Did Hitler Rise to Power? Timeline of Key Events

Many people wonder how Adolf Hitler was able to take control of Germany and the Nazi Party before beginning World War II. But how did Hitler rise to power so quickly? You may be surprised to learn that every step in Hitler's rise to power was legal — and democratic. Read Hitler's rise to power timeline to learn how a series of events enabled a wounded veteran from Austria to become one of the most infamous dictators in world history. 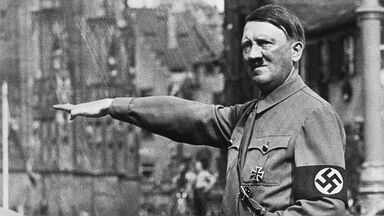 Despite being born in Austria, Adolf Hitler spent four years fighting in World War I in the German Army. He was temporarily blinded and mute from a mustard gas attack in 1918, just one month before Germany surrendered the war on November 10th. Hitler's outrage over Germany's loss — and the 1919 Treaty of Versailles, which placed the blame for World War I on Germany — inspired him to pursue a life in politics.

In September 1919, Hitler joined the Deutsche Arbeiterpartei (the German Worker's Party, or DAP) after being assigned to spy on it for the German Army in June. He respected the party's opposition to the new Weimar Republic, the Treaty of Versailles and equal treatment of Jews in Germany. Hitler quickly became one of the most prominent speakers of the party.

On February 24th, Hitler led a political meeting of over 2,000 people. He announced the nationalist Twenty-Five Point Program, also known as the National Socialist Program, and officially renamed the party as the Nationalsozialistische Deutsche Arbeiterpartei (the National Socialist German Worker's Party), later known as the Nazi Party. Hitler also began to speak in beer halls in Munich as a way to reach and recruit more people. His speaking and propaganda skills made him a popular figure throughout Bavaria.

Hitler threatened to resign from the NSDAP over the possibility of merging with the German Socialist Party. As he was the party's most well-known and influential figure, the party agreed not to merge with the rival party and to appoint Hitler party chairman. He now controlled the NSDAP, and led it into violent conflicts against other German political parties. Hitler formed the Sturmabteilung (Assault Division, also known as the SA or Brownshirts).

1922: The Hitler Youth and the Staff Guard

Hitler established three major organizations in 1922: the Jungsturm Adolf Hitler and the Jugendbund der NSDAP (the Hitler Youth) and the Stabswache (the Staff Guard, later the SS). He continued to speak against Jews and for the "victory of the Aryan" at party rallies. In October, Hitler admired Benito Mussolini's Fascist coup d'état in Italy.

1923: Reichsparteitag and The Beer Hall Putsch

The first Reichsparteitag (Reich Party Convention, or Nuremberg Rally) took place in January 1923 in Munich. Later in the year, Hitler attempted his own coup d'état in November 1923 during the Beer Hall Putsch, in which 2,000 Nazis marched on the city center. Sixteen Nazis and four police officers were killed. Hitler escaped but was arrested for high treason two days later. The incident gave Hitler a national profile.

At his 1924 trial, Hitler was convicted and sentenced to five years in prison. He wrote Mein Kampf (My Struggle), a manifesto to the Nazi propaganda and anti-Semitism, during his imprisonment. Although the Nazi Party was banned in Bavaria after the Beer Hall Putsch, it won a few seats in government in the May and December German federal elections. Hitler was released in December after serving only nine months of his sentence.

The failure of the Beer Hall Putsch and influence of Mussolini prompted Hitler to move toward legal means of gaining power, rather than violence. Mein Kampf was published in July 1925, making Hitler famous in the European Fascist movement. Hitler formed the Schutzstaffel (SS) outside the control of the SA. He formally renounced his Austrian Citizenship in 1924 as well.

Paul von Hindenburg was elected president of Germany. Joseph Goebbels joined the Nazi Party during this time period after reading Mein Kampf. He would later become Hitler's closest ally and the future Minister of Propaganda of Nazi Germany.

The Rise of the Nazi Party

Hitler and the Nazi Party were starting to gain some recognition outside Bavaria and throughout Germany. During the rest of the 1920s, the party used anti-Semitic propaganda and Hitler's popularity to move into legitimate politics. They gained voters and seats in every federal election, causing the moderate parties to take notice — and alarm.

Federal elections were more successful for the NSDAP than before, but still not strong: the Nazi Party won only 2.6% of the vote. However, by the end of the year, the Nazi party included more than 130,000 members.

The Nazi candidate for president, Erich Ludendorff, ran for president and only won 1.1% of the vote. The New York Stock Market crash of October 29th led to a major financial disruption all over the world. Massive numbers of German citizens were now unemployed and in financial distress.

The German Referendum of 1929 was held in December. It renounced the Treaty of Versailles and disallowed German officials to pay German war debts from World War I. Although the referendum ultimately failed, it gave the Nazi Party substantial recognition.

In 1930 there was an escalation of street violence instigated by the Nazis and propaganda by Goebbels. In the September federal election, Nazis won over 18% of the vote and gained 107 government seats. When combined with the Communists receiving almost 22% of the vote, the results of the election effectively locked out the more moderate parties of Germany. The Nazis were now the second-largest party in Germany.

Heinrich Brüning, Chancellor of Germany, attempted to alleviate financial pressure on Germany by invoking Article 48 of the German Constitution. This allowed the government to pass laws without the consent of the Reichstag, or parliamentary body.

Hitler joined a right-wing opposition to Chancellor Brüning called the Harzburg Front. It was an anti-democratic effort to form a united front against the moderate German government. However, the Nazis had no intention of joining forces with anyone; they wanted to be in control, with Hitler in command.

The Nazi Party now had over 800,000 members. Hitler ran for president in the March 1932 presidential election and lost to President Hindenburg, but gained over 36% of the vote. In May, Chancellor Brüning was replaced by Franz von Papen in an effort by President Hindenburg to try and stop Hitler's political ascent.

The Nazis won over 37% of the popular vote in July 1932. They were now the largest party in the Reichstag, and as such, they chose Hermann Göring to be Reichstag President. Hitler asked to be chancellor; when Chancellor Papen offered him the position of vice-Chancellor, Hitler refused.

In November, the Nazis received a lower percentage of the vote, but 19 prominent members of the German economy signed the Industrielleneingabe — a petition for President Hindenburg to make Hitler chancellor of Germany. In December, Chancellor Papen was replaced by Major-General Kurt von Schleicher, a rival of Hitler's. Papen made an agreement with Hitler that he could convince Hindenburg to make Hitler chancellor, as long as Hitler made Papen vice-chancellor.

By 1933, Hitler's political maneuvers would pay off for him and the Nazi Party. The timing of the Great Depression helped Hitler's cause, as millions of out-of-work Germans hung their hopes on Hitler's promises of prosperity. Just a few years later, Hitler would lead Germany into World War II in the ultimate test of his power and of humanity itself.

Hitler's Machtergreifung (seizure of power) began when he was named chancellor in January 1933, thanks to Papen's influence and Hindenburg's agreement. His appointment sparked concern in both neighboring democracies and in the Jewish community. In February, the Reichstag was attacked by a Communist arsonist, leading to swift action against Hitler's political rivals.

Hitler gained plenary powers in March from the Enabling Act of 1933, which gave him the ability to act without limitations from the Reichstag or the German Constitution. Once Hitler had these dictatorial powers, he eliminated civil liberties and opportunities for opposition. Political parties that were not Nazi parties were made illegal in July. In October, Germany withdrew from the League of Nations and the World Disarmament Conference.

During Nacht der langen Messer (Night of the Long Knives), Hitler instructed the SS to execute various political rivals and opponents, including leaders of the SA, which had become increasingly independent from Hitler's control. Because Hitler had plenary powers, he was able to order the killings without the consent of the courts. Over 150 people were murdered in the purge between June 30th and July 2nd, and hundreds more were arrested.

On July 3rd, Vice-Chancellor Papen resigned. President Hindenburg died a month later. The day before he died, Hitler's cabinet enacted a law that would abolish the role of the president, and that all powers of the president would be merged with the chancellor's upon Hinderburg's death. This allowed Hitler to become Führer und Reichskanzler - leader and chancellor — and therefore head of the government. Soldiers of the German Army took the Hitler Oath, swearing allegiance and obedience to Hitler himself instead of the state.

As Führer, Hitler would go on to isolate Germany from the rest of the world, both politically and economically. He rearmed Germany in a violation of the Treaty of Versailles and began expanding Germany's borders by annexing Austria in 1938. By 1941, Hitler's army had invaded the Sudetenland, Czechoslovakia, Poland, Denmark, Norway, Belgium, the Netherlands, Luxembourg, France, Yugoslavia, and Greece. His seige against Britain and the Soviet Union, along with the Japanese attack on the United States, brought nearly every country in the world out in force.

Under Hitler's command, Nazi Germany established over 40,000 concentration camps and ghettos to detain, enslave and murder prisoners. These prisoners primarily included Jews from Germany and other invaded countries as well as political opponents, homosexuals, Roma, and foreign nationals. All told, Hitler's pursuit of power caused the deaths of 75 million people before his own death in 1945.

A Cautionary Tale for Democracy Everywhere

The results of Adolf Hitler's rule were catastrophic and devastating to every community in the world. However, he would never have been able to move up the ranks of the German government without the backing of his supporters and political allies. The twenty years before World War II serve as a historical reminder of what can happen when fascism is allowed to invade democracy. Next, check out a reference guide about the difference between fascism vs. socialism vs. communism.