What Are Some Important Facts About Betsy Ross?

Most people know Betsy Ross (1752-1836) as the person who made the first United States flag, but this may not be true. The classic story of the widow who sewed George Washington’s flag originates with her descendants over a hundred years later, and there is no hard evidence to support the claim. However, Betsy Ross is still a remarkable figure intertwined with the creation of the American flag, and there are many fascinating facts about her life. 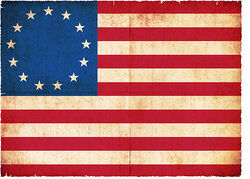 The Legend of Betsy Ross

The legend goes that George Washington, along with George Ross and Robert Morris, members of a committee established by the Continental Congress, visited Betsy Ross' house in Philadelphia in 1776 with a sketch of the flag that they wanted made. The flag featured thirteen alternating red-and-white stripes and thirteen six-pointed stars in a circle on a field of blue. The story goes that Betsy suggested using five-pointed stars instead, as they would be easier to cut out.

The legend that Ross sewed (and perhaps even helped design) the first United States' flag has no proof to substantiate it. The first verifiable account that she did so was a research paper written by Ross’s grandson, William J. Canby, and presented to the Historical Society of Pennsylvania in 1870. He cited his aunt Clarissa as his source, saying she told him the tale in 1856.

The trail stops there. Betsy Ross certainly sewed flags for the new United States; she even kept a receipt from the Continental Congress for flags she sewed for the Pennsylvania Navy in 1777. As to whether she sewed the first Stars and Stripes, or whether that storied meeting with George Washington ever happened, all we can say for sure is that there is no evidence of it.

Even if she was not the seamstress responsible for the most famous of American cloth, Betsy Ross is a historical figure in her own right. The following is a list of unique, substantiated facts about Betsy Ross. They should give you an idea of who she really was and what her life might have been like during the tumultuous years of the America Revolution.

A Tale of Patriotism

With little evidence for or against the story, the patriotic tale of the hardworking seamstress keeping her family business going in difficult times and supporting the war effort still warms American hearts. While we may never know if she actually made the first flag of the United States, we do know some important facts about Betsy Ross that may give us an insight into the role of women in Revolutionary America.

For more fascinating insight into this remarkable woman, take a look at YourDictionary’s Betsy Ross Timeline.