What Kind of Drugs Did Jimi Hendrix Take?

Unfortunately, the 1960s is often associated with free-spirited drug abuse. Along with his inherent talent, Jimi Hendrix is also known for his affinity for uncontrolled substances. While there are a few allegations of drug use involving Jimi Hendrix that can’t be verified, others certainly appear to be the truth.

Let’s take a look at what we know about Hendrix’s history with alcohol and drugs. 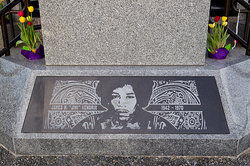 Alcohol is an addictive substance that Jimi Hendrix often used and abused. Hendrix told people that he got foolish when he drank, reporting that he gave away money. His bandmates and people around him also vouched that he often became violent when he drank. He was accused of attacking and abusing several people while under the influence.

You might not think smoking marijuana is a big deal, since so many people try it at some point in their lives. But, when you consider the combination of other drugs Hendrix mixed with his weed, you’ll quickly see how this could’ve taken a fatal toll. Mixing drugs can quickly become dangerous, no matter how "safe" each of them are individually.

Fans probably wonder what would’ve happened if he’d stopped with the weed and never advanced to LSD and other hallucinogens. According to Rolling Stone, Jimi’s 1967 album Axis: Bold as Love is considered the number one greatest stoner record.

Jimi Hendrix was known to use LSD while touring. Lysergic acid diethylamide, commonly called “acid,” is a psychedelic drug that makes you hallucinate. When you take LSD, you have an altered experience, misconstruing your perceptions of reality. You cannot think straight. Supposedly, Hendrix was “more or less” functional on LSD. Indeed, Jimi Hendrix is seen as one of the most prominent “acid rock” artists of his time.

Heroin and Other Drugs

According to an article published by Rolling Stone in 1970, while on trial for heroin possession upon landing at Toronto International Airport, “Jimi Hendrix claimed to have smoked grass four times, hash three times, dropped acid fives times, and sniffed coke twice but had ‘outgrown’ drugs.”

Hendrix always maintained that he never touched heroin. In addition to this, Roger Meyer, Hendrix’s sound engineer for many years, believes the speculation surrounding his drug use has been exaggerated. In an article written by the BBC, Meyer said, “You can’t play the guitar to that standard on stage or in the studio if you’re stoned on drugs.”

It’s easy to assume the cocktail of drugs Hendrix consumed throughout his life led to his premature death. He was only 27. However, the circumstances surrounding Hendrix's death are extremely sketchy.

His girlfriend Monika Dannemann claimed Hendrix took nine Vesperax sleeping pills (18 times the recommended dosage). That could have led to his death. However, the doctor who first examined him said he choked on his own vomit.

After a heavy night of drinking (or drugging), it’s possible to be completely passed out while your body is trying to throw up some of the toxins. But, if the intoxicated person remains passed out, he or she can easily choke and die.

We may never know what exactly killed Jimi Hendrix, but we do know there’s a possibility that drugs or alcohol played a role. Similar mystery shrouds the death of famous martial artist Bruce Lee. Was it a sleeping pill? Was it natural causes? Some things we’ll just never know for sure.