Who Signed the Constitution? Brief Bios of Key Delegates

The United States (U.S.) Constitution was signed by the people who participated in the Federal Constitutional Convention of 1787, each representing one of the original states. Discover who signed the Constitution, setting the stage for it to be ratified by the states the following year. 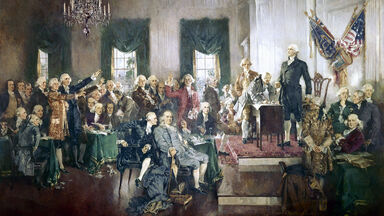 signing of the Constitution of the United States
Advertisement

The 39 people who signed the United States Constitution will forever hold an important place in the history of the country. Reviewing biographical information of a few key signers provides insights into how these people contributed to the country's early days and how their influence continues into the future.

Often called the “Father of the Constitution,” James Madison (1751-1836) of Virginia played a major role in the early days of the U.S. government. In addition to arranging the 1787 Constitutional Convention, he was a member of the Continental Congress and the First General Assembly of Virginia and co-authored the Federalist Papers with Alexander Hamilton and John Jay. He also served as a member of the House of Representatives, worked as Secretary of State during Thomas Jefferson's administration, and ultimately became the fourth President of the United States. In 1789, he proposed a series of amendments that ultimately became the Bill of Rights.

Pennsylvania delegate Benjamin Franklin (1706-1790) was a renowned inventor, statesman, publisher, philosopher, and diplomat. He was the founder of the Pennsylvania Gazette and publisher of Poor Richard's Almanac. He was a member of the Continental Congress and a signer of the Declaration of Independence. The year the Constitution was signed, he was employed as Philadelphia's postmaster. He is also considered one of the earliest abolitionists in the nation.

New York delegate Alexander Hamilton (1755-1804) immigrated to the U.S. from the West Indies. He served in the Continental Army under George Washington and later served in the Continental Congress, the Annapolis Convention and the New York General Assembly. He worked closely with John Jay and James Madison to promote the Constitution to the states through a series of documents known as The Federalist Papers. He served as the nation’s first Secretary of the Treasury. He was killed in a duel with Vice President Aaron Burr in 1804.

John Rutledge (1739-1800) was a leading political figure in South Carolina throughout the Revolutionary War and beyond. His many roles included lawyer, provincial assembly member, governor, attorney general, and state chancellor. He was a delegate to the Stamp Act Congress and a member of the Continental Congress. He served on the South Carolina Supreme Court and later served as one of the original Associate Justices of the United States Supreme Court and the second Chief Justice. He also served as the first President of South Carolina and later the state’s first governor.

Richard Bassett (1745-1815) represented Delaware at the Constitutional Convention. He was a soldier during the American Revolution, where he played a major role in mobilizing and organizing Delaware's armed forces and militia. He went on to become a statesman, later serving as Governor of Delaware and eventually as a U.S. Senator. He also played a critical role in the formation of the federal judiciary and worked tirelessly to move the capital of the nation from New York City to Washington, DC, where it remains today.

Jonathan Dayton (1760-1824) was a delegate from New Jersey. He worked as a lawyer and fought in the Revolutionary War. He went on to serve as a member of the U.S. House of Representatives and became Speaker of the House. He also served as a Senator. He was later implicated in an alleged plot with Aaron Burr and brothers Aaron and Matthias Ogden to combine Mexico and the western U.S., but his case was never brought to court.

People Who Signed the Constitution

The people above are the most well-known signers, but they're not the only ones. After George Washington placed his signature on the top right of the document's signature block, the others signed in state-by-state clusters, beginning with the northernmost states and proceeding southward. The following is a complete list of all who signed the Constitution, and the states they represented (in order). Rhode Island is not included because the state did not send a delegation.

The representatives from Massachusetts signed beneath the Connecticut delegation.

The lone delegate from New York, Alexander Hamilton, signed below the Massachusetts delegation.

The signatures of New Jersey's representatives are below New York's.

The Pennsylvania delegates signed beneath New Jersey's, completing the first column of the signature block.

The Delaware delegation signed at the top left of the Constitution's signature block.

Maryland's delegation signed next, just after the Delaware block.

Because he served as president of the Constitutional Convention, Washington's signature was the very first one. He added a notation to his signature indicating that he was a deputy from Virginia.

Members of North Carolina's delegation signed the space below Virginia's.

As the southernmost state at the time the Constitution was adopted, signatures of Georgia's representatives made up the final block.

State Ratification of the Constitution

Learning about who signed the Constitution is an important part of early American history. The people who signed the U.S. Constitution had life histories of tremendous sacrifices, and they used their extraordinary gifts in creating this complex document. They faced many challenges in their effort to help create a new nation, including coming to agreements like the Great Compromise. Gain even more perspective about American history by learning about some notable American symbols and their unique histories.