What Is Known About Albert Einstein's Family?

If you have ever wondered about Albert Einstein's personal life, a good place to start is to take a close look at his family. 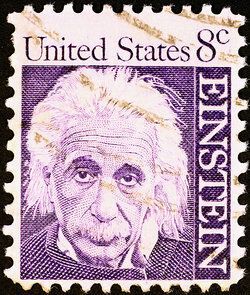 Family that Albert Einstein Was Born Into

Albert Einstein was born in Ulm, a part of the German Empire, on March 14, 1879. His father was Hermann Einstein and he was both an engineer and a salesman. His mother was Pauline Einstein.

Although they lived in Ulm in the Kingdom of Wuttenberg when Albert was born, they moved to Munich when he was a year old. It was there that his father Hermann and his uncle founded a company that made electrical equipment based on direct current.

His parents were both Jewish; however, they were not practicing Jews. In fact, they sent Einstein to a Catholic school. Which religion his parents practiced at home is a little bit ambiguous, although it seems to be the case that they did not practice any sort of religion. His father once allegedly called Jewish something to the effect of ancient fairy tales.

Einstein's parents did not teach their child any religious practices. Instead, Einstein sought them out for himself. He was a devout Jew for awhile, but then abandoned the practice. Many have cited Einstein was an atheist; however, he was not an atheist, and in fact, has been quoted as saying that he cannot tolerate the fact that people would call him one.

Perhaps it was his father who first ignited his passion in the field of science when he showed Albert a pocket compass. Albert concluded that there must be something which caused the needle to move. This is probably where his interest in science began.

Einstein married a woman named Mileva Maric. They were students together at in Zuric. They were married in January of 1903. However, a year before that, in 1902, the couple had a daughter together who they named Liesel.

Liesel is a very interesting person in the life of Albert Einstein. Historians did not even know that she existed until 1986 when they found a letter between Albert and Mileva that mentioned her. After 1903, no one ever heard of her again. Historians do not know if she was adopted, if she passed away, or some other sort of fate awaited her. It does not seem that we will ever know.

They had two more children together: Hans Albert Einstein in 1904 and Eduard in 1910. The couple got divorced nine years later, after having lived apart for five years while Einstein taught at the University of Berlin while Mileva stayed in Zurich and took care of the children.

Einstein had been having an affair with Elsa Lowenthal since 1912, which presumably put a strain on his first marriage. She was his first cousin on his mother's side and his second cousin on his father's side. They were married shortly after Einstein divorced his first wife. However, after being married for 17 years, Elsa fell quite ill and she passed away in December of 1936.