12 Female Mathematicians That Made Herstoric Contributions 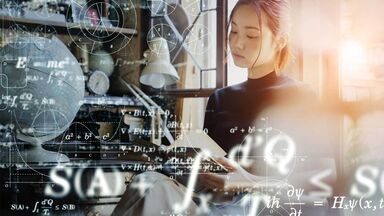 One of the first known mathematicians hailed for her accomplishments is Hypatia of Alexandria. Born in about A.D. 355, Hypatia was the daughter of Theon of Alexandria. She was a renowned teacher of mathematics and considered the first woman mathematics teacher. In addition to collaborating with her father’s works, she wrote several of her own works on mathematical concepts, but they have been lost.

Hailed for her contributions to the number theory, Marie-Sophie Germain was a budding math genius at an early age in the 1780s. Even with her parents' disapproval, she secretly studied mathematics and befriended students of Ecole Polytechnique so she could see their notes. Her mathematical prowess was noticed by J.L. Lagrange when she submitted a memoir under a male name. However, her memoir was rebuked when it was realized a woman wrote it. In her lifetime, she contributed to Fermat’s Last Theorem and pioneered elastic theory. She also was the first woman to receive awards from Paris Academie Royale des Sciences.

Also known as Ada Byron, Ada Lovelace was the first computer programmer. While she excelled at mathematics as a child, it wasn’t until translating an Italian engineer's article that Lovelace's genius truly began to shine. As she was translating for Charles Babbage, Ada Lovelace started leaving notes on the analytical engine for the computer. In addition to noting computer looping, she also created a sequence of Bernoulli numbers, a sequence of rational numbers. She also tried to create mathematical algorithms for gambling but failed.

Caroline Herschel is considered the first female astronomer and developed the current mathematical approach to astronomy. Born in 1750, Herschel was trained by her father in mathematics, but it wasn’t until she moved in with her brother that her love for astronomy and mathematics exploded. Given her brother’s obsession with the stars, Caroline followed his footsteps and discovered comets and was one of the first women to join the Royal Astronomical Society.

Born in 1910, Dorothy Vaughan worked to pave the way for African Americans and African American women in NASA. Vaughan worked as a mathematics teacher before working on the segregated computations positions for aeronautical research data. Due to her exemplary contributions, Vaughan became the first Black supervisor of the West Computing group. She was also at the forefront of electronic computing.

Born in 1919, Julia Robinson studied mathematics in college, only to switch to research mathematics. In addition to solving Hilbert’s tenth problem, she contributed to multiple mathematical theories like game theory. She also made several contributions to statistics along with being the American Mathematical Societies’ first woman president. She was also the first woman to make her way into the National Academy of Sciences.

Notable for her creative abstract algebra innovations, Emmy Noether was born in 1882. Though women weren’t allowed to complete mathematics at the University of Erlangen-Nurnberg, Noether audited classes for a year at the University of Gottingen until women were allowed to enroll. In the Ph.D. program, Noether completed her dissertation in algebraic invariants before teaching unofficially at Gottingen University. Noether made major mathematical contributions to abstract algebra and was praised by Albert Einstein.

Marjorie Browne was born in 1918 in Tennessee. While segregation and Jim Crow laws meant many African Americans didn’t finish high school, Brown became the third African American woman to earn a Ph.D. in mathematics. In 1951, she became chair and pioneered computer use in North Carolina college. She received the W.W. Rankin Memorial Award for Excellence in Math in 1975 and was the first African American woman to serve on the council for the National Science Foundation.

The Scottish scientist and mathematician Mary Fairfax Somerville, born in 1780, secretly studied mathematics on her own and through a tutor. Upon her first husband's death, Somerville had the freedom to dive deeper into her mathematics study, and her second husband, William Somerville, encouraged it. Surrounded by scientific minds, Somerville translated complex algebraic works into easy to follow textbooks and created her own works in physical geography. Along with Herschel, she was one of the first women to join the Royal Astronomical Society and was awarded the Victoria Medal of the Royal Geographical Society.

Virginia native Mary Jackson was born in 1921 and had an early love for math and science. An African American woman, Mary earned dual degrees in mathematics and physical sciences and was recruited into the West Area Computing section in 1951. After requesting special permission, she took training courses to become NASA’s first African American female engineer.

Russian mathematician Sofya Vasilyevna Kovalevskaya was born in 1850. Entering a marriage of convenience, she moved to Germany to earn her Ph.D. in mathematics becoming the first woman to receive a math doctorate. After a split with her husband, she entered the University of Stockholm to become the first female professor in 1889. In addition to her many contributions in math, she became the Russian Academy of Sciences’ first female member.