11 Leonardo da Vinci Inventions That Were Ahead of Their Time

What are the artistic and scientific achievements of Leonardo da Vinci? You’d be surprised to find out it’s a lot more than paintings. Leonardo da Vinci created sketches and designs for everything from war machines to a beginning helicopter. Explore some of the inventions of one of the greatest minds in history. 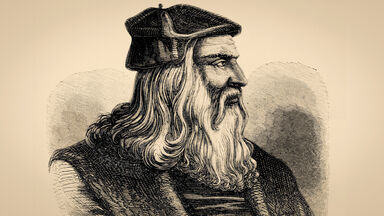 While many people are acquainted with Leonardo da Vinci the painter, you might not realize that his mind was a vast cavern of ideas. In addition to being an amazing artist, Leonardo da Vinci’s achievements included several scientific marvels.

While you might skydive from a plane now, it was unheard of in da Vinci’s time. However, this didn’t stop him from creating a sketch of a parachute. According to the British Library, the parachute used linen and poles to create a triangular shape. While da Vinci didn’t create one in his time, Skydiver Adrian Nicholas tested the parachute and found it to provide a smooth descent.

In the 1500s, they were still trying to understand the world around them. However, da Vinci wasn’t interested in staying on land. He wanted to take flight. So, he created a sketch for one of the first helicopters, called an aerial screw. The tension of a screw would power this contraception to take flight. Several 3D models have been created of this wondrous innovation, including one in the Leonardo Museum.

Da Vinci didn't just think outside of the box; he thought outside of his century. In one of his Codex, there is a design to create a mechanical lion. This machine uses gears, wheels and cords to control the movements of the lion. The mechanism would have made the lion move its legs and open its mouth.

While it's not one of his most well-known creations, hidden on the page of the Codex researchers found an interlocking cube. More like a doodle than some of da Vinci’s other sketches, the cube uses interlocking pieces to create a game or a safe. Only those that know the combination would be able to open it. Neat, right?

If you look at da Vinci’s journals, you’ll see many different flying machines, including the hand glider. This machine didn’t use wings to flap but instead has a canvas top like a kite. The human flyer would use cords to control where to go. Paraglider Robbie Whitetail actually tried out this glider. The machine did work but a tail needed to be added to keep it from crashing.

Among his many great war machines, da Vinci sketched a destroyer ship with an underwater ram bar. Using a pulley and lever system, the sailors would release the lever to strike and sink the other ship. He even thought to recommend using sharpened trees to create the spike.

While the destroyer would be your stealth warship, the gunship was more of an in-your-face kind of naval warfare machine. This ship had a stealthy cone shape. The cannons would be mounted at determined intervals all around the ship, allowing for 360-degree shooting. A gear system would move the rutters to spin the ship in any direction.

The Renaissance didn’t have guns. However, they did have bows. So, da Vinci improved upon it through a rapid-fire crossbow. This bow was created of steel; therefore, it had a mechanism for pulling the string back. This would allow the user to rapidly and accurately load and fire the bow with less effort.

If Leonardo could create a mechanical lion, it should come as no surprise that he also laid out the plans for creating a mechanical soldier. Like the lion, the knight used a system of pulleys and gears to create movement. According to da Vinci’s schematics, the knight would move its legs, arms and neck. While it would have been able to stand, it would not have been able to walk. Robotic experts Mark Rosheim and Mario Taddei used da Vinci’s schematics to create a working prototype.

In addition to being a scientist, mathematician and inventor, da Vinci was also a prolific artist. He created works of art that are still revered to this day, like the "Mona Lisa" and "Portrait of Ginevra Benci." However, he also had an interest in music and created several musical instruments. Check out a few of da Vinci’s artistic innovations.

There isn’t an area da Vinci didn’t think he could improve on, including music. So, he created the glissando flutes that change tone more like the human voice by sliding the hand up and down the flute. This worked to stop the tone of the flute from changing in jumps.

While this invention was never given a name by da Vinci, the keyboard nature and viola sound it creates has designated it the harpsichord-viola. This musical instrument would strap onto a person and be played in a procession. Additionally, given the detailed specs, it’s believed that da Vinci created a prototype.

Organ music is a standard in churches and cathedrals. Could you imagine making that music continuous? Well, da Vinci could. He created the design for a continuous organ. According to the Leonardo Museum, the player "could pump wind with his legs and play with both hands free, while the system provided a continuous air flow." This machine was built by the Centro Studi Leonardo3 in Milan and played on da Vinci’s 500th death anniversary.

One of the greatest minds of the Italian Renaissance, Leonardo da Vinci was a true jack of all trades. He created masterpieces along with blueprints for flying machines. Explore a modern genius by looking at the inventions of Elon Musk.